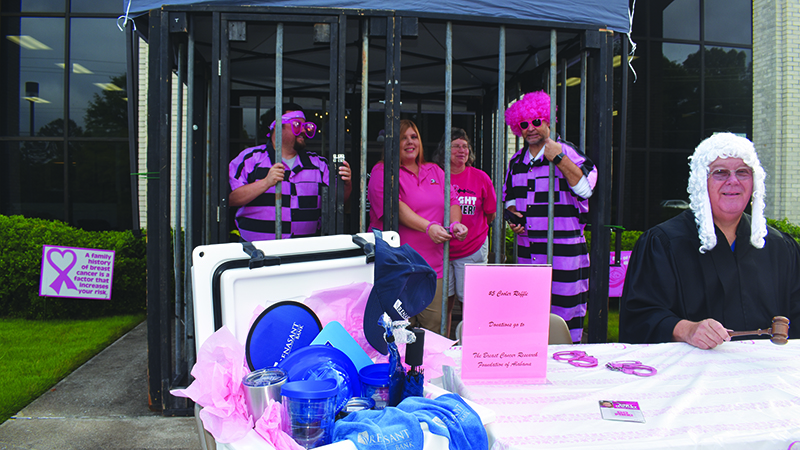 “Renasant Bank partners with Breast Cancer Research Foundation of Alabama every year, and we raise money for them,” said bank manager Nancy Warren-Holland. “It’s strictly for research for women and men in Alabama that have breast cancer.”

The item being raffled was a cooler with various prizes in it.

Warren-Holland said the pretend prisoners raised money by having their bonds paid.

At a table in front of the pretend jail sat Chambers County Sheriff Sid Lockhart dressed up as “Judge Jugs.”

“It’s just an awesome outpouring, and it always proves how giving Chambers County is,” she said.

Lockhart said he was having “a ball” locking up the pretend prisoners.

“It’s about time they go to jail,” he joked. “But I’m having a great time raising money for breast cancer awareness.”

Lockhart said the cause was “near and dear” to his heart because he had breast cancer about 12 years ago and because he lost his mother to cancer.

One of the prisoners was Gator Kincaid, owner of Gator Media.

Parked in front of the fundraiser was a pink 2012 Chevrolet Camaro which, according to Major T.J. Wood, was dedicated to a girl named Meagan Bonner who died several years ago from a rare form of cancer.

Breast Cancer Awareness Month has been observed every October in the U.S. since 1985. Its original purpose was to educate women about breast cancer and early detection tests. It is now observed to raise awareness of breast cancer and raise money for research on the disease, as well as other related causes.