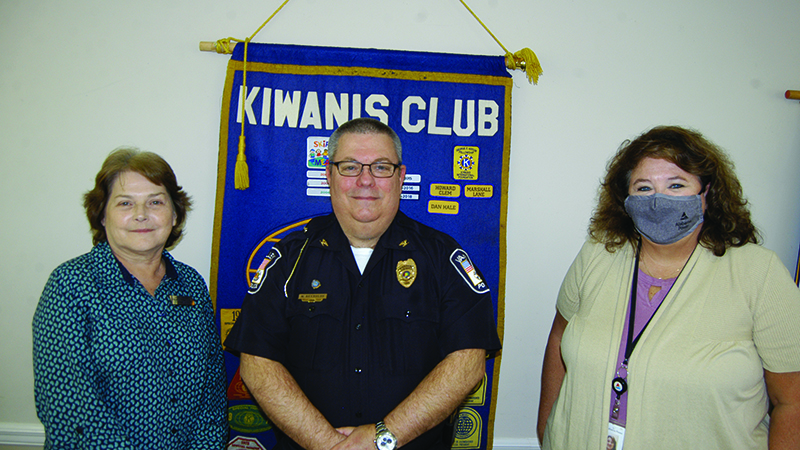 THE NEW CHIEF SPEAKS — Police Chief Mike Reynolds (at center) was the guest speaker at Wednesday’s noon hour meeting of the Kiwanis Club of Valley. He said there had been many changes in police work since he joined Valley Police Department in 1988. “In today’s world, the only way any organization can grow is through change,” he said. “Not just change for the sake of change but something that is well thought out.” At right is Karen Bennett, program chair, and at left is Debbie Yates, club president.

VALLEY — New Valley Police Chief Mike Reynolds told members of the Kiwanis Club of Valley on Wednesday that police work has changed a lot since the time he joined Valley Police Department as a new officer in 1988.

“At one time, a police officer’s word was gold, but  that’s not true anymore,” he said. “It started changing in the early 1990s with the Rodney King incident in Los Angeles. When I started, my equipment was little more than a ballpoint pen and a ticket book.  Today’s officer sits in a police car with all kinds of gadgets and gizmos. It looks like the bridge of a starship.”

Reynolds said that change is not an entirely bad thing.

“In today’s world, the only way any organization can grow is through change, not just change for the sake of change but something that is well thought out.”

Something a modern police department has is a mission statement. VPD’s statement reads: “The members of Valley Police Department are dedicated and committed to working with the community to make the City of Valley a desirable place to live. work or visit. Our mission is to partner with the community to solve problems and improve public safety in a manner that is fair, impartial, transparent and consistent.”

“I want our officers to buy into our mission statement,” Reynolds said. “I have got to get them out of the us versus them mentality.”

For the most part, police officers are dealing with drug users and petty criminals. They can very easily become jaded, thinking that most people are like that. They are not.

“We definitely need more training, and not just for police officers.” Reynolds said. “We have to change with the times. People out in the community need to understand that bad stuff doesn’t always happen when the police are in your neighborhood.”

Reynolds said that VPD is fortunate to have a mayor and council that are highly supportive of them.

“Over the years, they have pretty much given us everything we have asked for,” he said.

Valley Police Department is awaiting three new vehicles to get the equipment installations they need before they can go out on the street. Valley officers have had body cameras for five years now. Reynolds said it’s  time to have them replaced with newer and better body cameras.

Reynolds said that body cameras are well worth what the city has paid for them. In most cases, when someone who was arrested complains about the way they were treated, the body camera footage usually shows the officer acted property in making the arrest.

“Many, many times, the body cameras have protected our officers from false allegations,” Reynolds said.

A persistent problem is that police departments in nearby towns like Opelika and Auburn offer more pay.

“Smaller departments like Valley are often used as a stepping stone to larger towns with better pay,” Reynolds said.

Reynolds listed the core values of the Valley Police Department. They include professionalism, respect, integrity, dedication and excellence.

“We will treat the public and our colleagues with courtesy and respect,” Reynolds said. “We understand that our appearance, words and demeanor contribute to the public’s confidence in us. We are responsive to the community and deliver services promptly and efficiently.”

Respect comes with acting with fairness, restraint and impartiality in carrying out an officer’s duties.

“We work with the community to understand cultural influences and to overcome unconscious biases,” Reynolds said. “We understand that our actions combined with the way we treat members of the community contributes to our legitimacy in the eyes of the public.”

VPD is committed to the highest standards of honesty and ethical conduct.

“Honesty and ethical conduct are the cornerstones of our profession.” Reynolds said. “We will uphold public trust and our commitment to our core values. We are dedicated to the organization, each other, our families and the citizens we serve. We will strive for excellence in all that we do. We will never rest on our laurels and will continually seek to improve ourselves and our organization through mentorship, guidance and training.”

Reynolds said he was very fortunate to be following Tommy Weldon as chief.

“In situations when a former chief left under a cloud, it can be very difficult for the incoming chief. He has a job to do in re-establishing public trust in the department. Chief Weldon retired on the best of terms. For a long time, he has been my friend and mentor,” Reynolds said. “I couldn’t be following anyone I have a higher opinion of than Chief Weldon.”