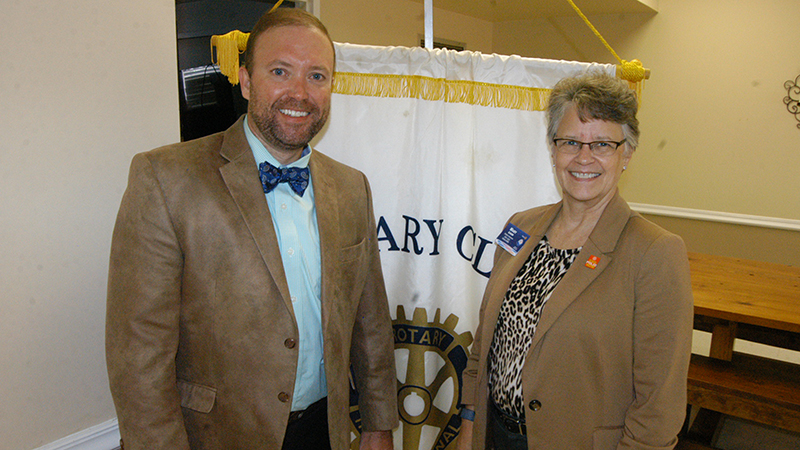 District governor speaks: Mary Ligon (at right) was the guest speaker for the Thursday noon hour meeting of the West Point Rotary Club. She offered some advice on attracting new members to the club. It’s a bad trend, she said, when any civic club is losing more members due to health reasons and job changes than having new members join. At left is Brian Aplin, the club president.

LANETT — Participation in civic clubs has been declining for some time, and some clubs are seeking to change this negative trend by being innovative in attracting younger members by appealing to their interests.

Mary Ligon of Albany, Georgia, the district governor of District No. 6900, talked about this at the Thursday noon hour meeting of the West Point Rotary Club.

What’s happening far and wide, she said, is that more clubs are losing more members through attrition than getting new members to join.

Ligon said it’s important for membership to be growing for any civic club.

“The more members you have, the more hands you have to get things done,” she said. “You need to increase participant engagement. You need to look at it as if you are your own customers. Are you happy and satisfied? Are you getting something good for your time and commitment?”

It’s wise, she said, to consider having projects with local nonprofits. There’s strength in numbers, and having more people involved increases the chances for success.

“It’s good for you to focus on what your impact should be in the community,” Ligon said. “The impact is the story you have to tell. How did what you accomplish change someone’s life for the better? If you are just doing stuff, people don’t see an impact. It doesn’t register with them.”

Ligon asked members of the club what was Rotary International’s vision statement.

“Together, we see a world where people unite and take action to create lasting change — across the globe, in our communities, and in ourselves,” it reads.

It’s a new statement and was recently adopted in a Rotary International Board of Directors meeting held in Atlanta. The stated top priority is to support and strengthen clubs by retaining current members, increasing current membership, starting new clubs and increasing the number of female members and members under 40. A second priority is to increase humanitarian service by increasing contributions to End Polio Now, increasing grants, encouraging the interaction on service projects and increasing contributions to the endowment fund.

Rotary International is well known for its efforts to wipe out polio. Once a much-feared disease in the U.S. and around the world, polio is on the verge of being totally eliminated. Only two cases were reported worldwide last year. One was in Afghanistan and one in Pakistan. The new Taliban government in Afghanistan has said they will allow vaccination efforts to continue.

“Rotary’s legacy is to end polio,” Ligon said. “We are getting very close to that goal.”

It might be good, said Ligon, to use some creative thinking to attract new members. Before asking someone to join, she said, get them to help you with a service project. They might like doing that and feel they have done something worthwhile. That may make them more interested in joining.

West Point Rotary has two major service projects each year. They host an annual tournament at the Point University Golf Club to benefit Valley Haven School and the members purchase Christmas gifts for the girls at the Tallapoosa County Sheriff’s Ranch.

Ligon asked members of the club what year the Ford Motor Company was founded and what was its first mass-produced vehicle. A member of the club correctly said 1903 and the Model A. She followed that up by asking how many new models have been introduced since then. It would take a lot of digging to answer that one correctly.

“Ford is constantly adapting to customer needs and wants,” she said. “Rotary was started in 1905. How many club models have we had since then? One. We meet for lunch, have fried chicken and a speaker. We need to adapt. There’s not one model that works everywhere anymore. Find out what works for you and do that.”

She suggested what’s known as AMP, or alternate meeting places.

Ligon said that some civic clubs meet for breakfast, some for lunch and some for dinner.

“We can give you ideas and suggestions,” she said, “but the decisions you make will be yours alone.”

She said there’s a crying need for better communication between club members.

“You haven’t updated your social media in a year-and-a-half,” said. “I went to the Hampton Inn thinking the meeting was there.”

The local club hasn’t been meeting at the Hampton since before COVID. The current meetings are taking place at the Jane Farrar Event Center in downtown Lanett and catered by Terri’s Mill Village Cafe. When there’s a conflict and the Event Center isn’t available, they meet at the Greater Valley Area Chamber of Commerce office in Valley.

Members of the club held an extensive discussion of alternate meeting sites and the possibility of changing the club’s name to the Chattahoochee Valley Rotary Club for the purpose of attracting more members from the Alabama side of the state line.