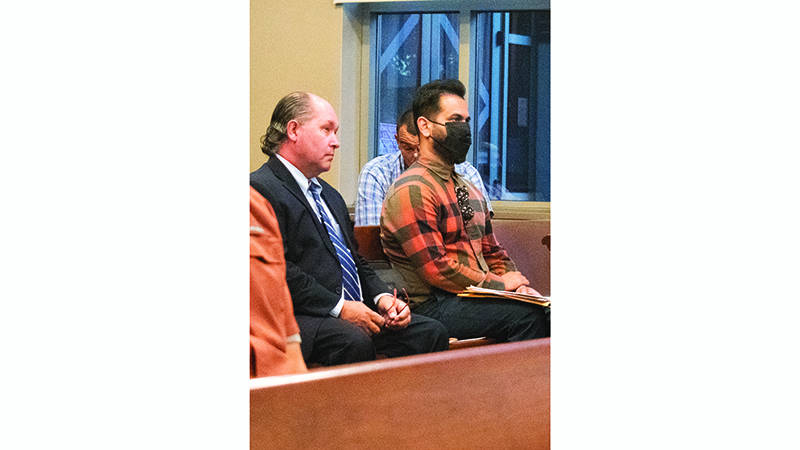 Revoking licenses: Above, one of the store owners sits with his attorney, Ben Wilcox.

Ten businesses that sold alcohol to minors will be issued a fine of $500 and will be banned from selling alcohol for 30 days.

The Troup County Commission voted on the fine and ban during Tuesday night’s meeting.

The typical process for a first-time offense is to send notices of 30-day suspension and fees for reinstatement to the businesses. Troy Anderson, the Troup County director of community development, suggested issuing a reinstatement fee of $750 to each business and banning the stores from selling alcohol products for 30 days. The ban is from Oct. 25 to Nov. 24.

Ultimately, the board voted that the fine be lowered to a reinstatement fee of $500 along with the 30-day license suspension from Oct. 25 to Nov. 24.

On Sept. 23, investigators with the Troup County Sheriff’s Office Narcotics Division conducted a sting operation targeting businesses believed to be selling alcohol to minors in the area. Investigators checked 19 locations in Troup County during the investigation and found that 10 locations did sell alcohol to a person under the age of 21.

The clerks making the transaction at the stores were issued a citation both by mail and in-person for the charge of selling alcohol to a minor.

All of the involved businesses were first-time offenders, Anderson said.

“Based on our research, none of these business owners have been cited for this violation in the last five years,” he said.

Councilmember Lewis Davis initially wanted to table the recommendation to request additional information on if the county was making a fair decision due to the businesses being first-time offenders.

“This is a bad offense, I want everyone to know that, but me personally, this impacts the business community, and I want to be sure that we’re fair in everything that we do,” he said. He would later vote in favor of the lowered fine and 30-day sale ban.

Davis also inquired whether the owner of the business or if the person who sold the alcohol to the minors were at fault.

“We throw ownership on the beer and wine license applicant,” Anderson explained.

“That person might not be the business owner or a manager, or even a tenant.”

The individuals who physically sold the alcohol products will receive a misdemeanor from the state and will have court appearances in January.

No arrests were made during the investigation due to concerns of COVID-19, Anderson said.

The locations in which the clerks were issued citations are the following:

During its Oct. 5 meeting, the board had approved for alcohol license revocation letters to be sent out to the 10 businesses.

Each has since received acknowledgment of the violation.

Of the 10 businesses, one, Ribitz, made a request in writing to be heard in a separate hearing, which will be held on Nov. 2 at the board’s meeting at 9 a.m.

The board voted to approve the request to hold the hearing at that time. The other nine businesses did not submit a request but had 10 days to do so after being cited, County Attorney Jerry Willis said.

Eight of the other nine businesses possessed a beer and wine license at the time of the TCSO operation, Anderson noted.

One business, 4584 Hamilton Road, now known as Jimmy’s Gas and Food, did not possess a beer and wine license at the time of the operation.

Anderson suggested a double penalty in Jimmy’s case, the lowered reinstatement fee of $500 along with the 30-day license suspension, as well as a fine of $750 fee for the lack of the license.

The owner of the store has the option to apply for a beer and wine license.

West Point Attorney Ben Wilcox, who represented the new owner of Jimmy’s Gas and Food, argued that the owner has been trying to buy Jimmy’s as well as another business in the county since last April.

The sales were not completed at the time of TCSO operation, he said, and his client was not the legal owner of Jimmy’s. He said the business was still being operated by the prior owner.

Anderson responded that tax records showed that the change in ownership occurred on July 2, 2021, but Wilcox argued that that date reflected the sale of the property but not the business itself.

Upon the end of each businesses’ 30-day suspension, if the $500 fee is paid, the authorization to sell alcohol will be restored on Nov. 24.

Signs stating the businesses’ inability to sell alcohol products will be posted to their doors when the ban is initiated.

The suspension will go into effect Monday.

Capt. Nathan Taylor with the Troup County Sheriff’s Office said the office conducted operations like the current one at least once a year.

“The results [of the operation] are typical of what we see here,” he said.