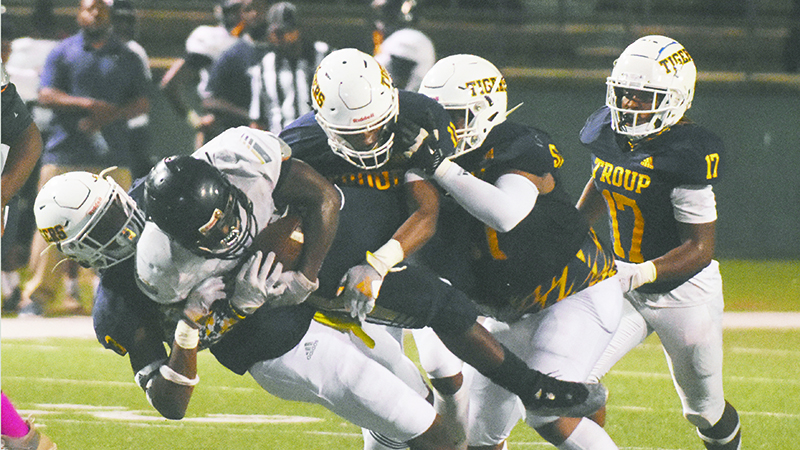 Noah Dixon and CJ Sands intercepted Kendrick passes in the final minute of the first quarter, turning a 10-point game into a 24-point lead for the Tigers. Dixon’s interception was on a pass to the right side of the field, which he jumped up, grabbed and ran back 55 yards for the score.

Sands took advantage of Kendrick being backed up, jumped in front of a wide receiver screen, and stepped into the end zone for an easy score on the last play of the quarter.

Troup kept the momentum going from there, as the Tigers pulled off their own wide receiver screen on a pass from Taeo Todd to Dwartney Wortham to make the score 31-0 Tigers.

After a three-and-out, a low snap resulted in Kendrick’s punter trying to run for a first down on fourth and long.

Instead, he was tackled deep in Troup territory.

The Tigers’ offense stalled, resulting in a field goal attempt, but a high snap forced the Tigers just to fall on the ball.

That was about the only thing that went wrong for Troup all night.

Just before the half, Todd found the end zone on a 6-yard touchdown run around the right side, giving the Tigers a 38-0 advantage.

Neither team scored in the second half.

Before the back to back pick sixes in the first quarter, Cody Bray made an early field goal to make it 3-0. Todd had a couple of runs over 10 yards to move the ball into scoring range on the Tigers’ next drive, and Kullum Irvin capped the drive with a rushing touchdown to make it 10-0 Tigers.

It was all Troup from there.

Troup (5-1) hosts Shaw next week. With the win, the Tigers stay atop class AAAA, region 2. Carver, which beat LaGrange Friday night, heads to Callaway Stadium to play the Tigers in two weeks in a matchup looking more important by the week.