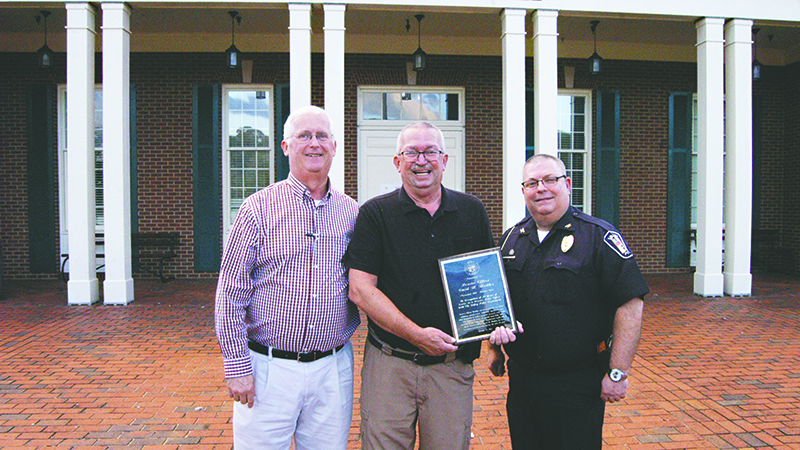 HAPPY RETIREMENT: Reserve Officer David Maddux (at center) is retiring from the City of Valley after 20 years with Valley Police Department. He had previously retired as a security guard for EAMC-Lanier hospital for 31 years. At Monday’s meeting of the city council, Police Chief Mike Reynolds (at right) presented him a plaque commending him for his long-time service to the police department. Reserve Officer Maddux is the brother of Council Member Randall Maddux (at left).

VALLEY — The Valley City Council approved a zoning change at Monday evening’s meeting. The meeting began with a public hearing to discuss why the request was being made. Planning and Development Director Travis Carter said that the request involved changing a two-and-a-half acre site near the intersection of Fairfax Bypass and Cusseta Road from R-5 to C-3. It’s south of the new city water tank and near the site where Combs Road meets the bypass.

Carter said the property owner wants to put some self storage units there.

“With the new subdivision coming across the road, it will probably be a welcomed addition to those who will be living there,” he said.

With no one present to speak in opposition, the hearing was closed.

An ordinance to enact the zoning change was unanimously approved upon a first reading.

Work is now under way at what will be the Camellia Crossing subdivision. It could contain as many as 300 new smart homes at build out. A contractor is putting in a new force main along Fairfax Bypass. It will run from the subdivision site to Givorns. “Anyone driving past there needs to slow down and be careful,” Mayor Leonard Riley said. “They are working fast and could be finished in two weeks,”

Another ordinance was approved to sell a city-owned lot on 31st Street to Jesus Hernandez for $800.

The lot had been owned by the city since a condemnation action to clean up a nuisance property. The city will have a public hearing prior to its next meeting on Nov. 8 to confirm the costs of cleaning up 10 properties. Two are located on 46th Street, with the others on 31st, 55th, 57th and 58th Streets, Stanfield Road, Fairwoods Drive, Middle Street and Lower Street.

“MLK, Morgan Street and 31st Street are still on our list,” he said. “We are working with a contractor on this. We can get a lot done with good weather.”

He also recommended that trick-or-treating take place on Saturday.

“We don’t set a time for Halloween, but we are recommending that it take place between 6 and 8 p.m. on Saturday,” Reynolds.

Valley Parks and Recreation’s drive-through event at Valley Sportsplex will be taking place from 6 p.m. to 8 p.m.

Reynolds presented a plaque to Reserve Officer David Maddux, who is retiring after serving Valley Police Department for 20 years. He’d previously retired after 31 years of service as a security guard at EAMC-Lanier Hospital.

The plaque reads: “Reserve Officer Maddux served any time he was asked, including special events, ball games, fundraisers and often responded to traffic accidents to assist with traffic. He was there for us when we needed help. The members of Valley Police Department would like to thank Reserve Officer David Maddux for his assistance and friendship during the past 20 years.”

“I want to thank Valley Police Department for all they did,” Maddux said. “They were always there for me, and I did all I could to help them.”

Council Member Jim Clark thanked the Valley Police Department for having made a recent arrest in his district. He also thanked Travis Carter and Riley for talking with AmWaste officials about some continuing problems with garbage pickups in the district.

“We had a good meeting with them,” the mayor said, “but a lot more needs to be done.”

Council Member Marquetta Madden thanked Maddux for his service to the city as a reserve officer. Other members of the council echoed that sentiment.

Riley said the city entered a new fiscal year on Oct. 1 in the best financial condition it had ever been in.

The ending balance on Sept. 30 was a little more than $6.8 million.