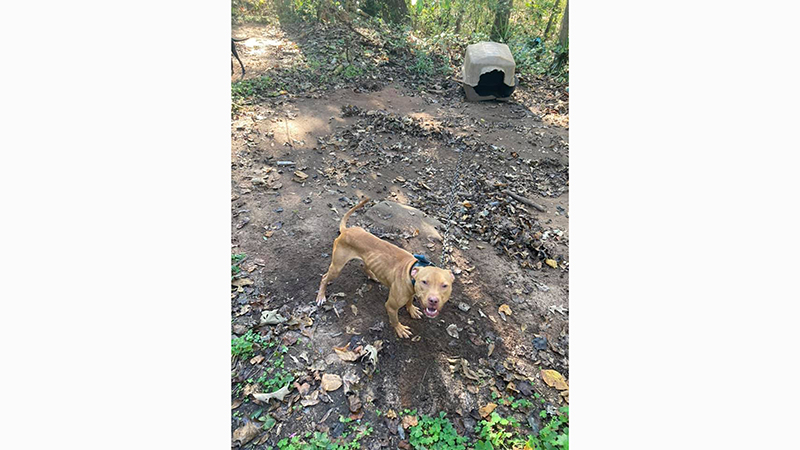 On Wednesday, 12 apparently neglected pit bulls were discovered chained up in a wooded area in Valley. New Hope Rescue, Inc., an animal rescue organization, stepped in to find the dogs temporary housing while the resulting criminal case was active. Jenny Rogers, owner and director of the organization, announced that a warrant would be issued Thursday to the owner of the property and that the court date would be on Nov. 3 or Dec. 1.

“Depending on what happens there, dogs can be fully released to owners or adopted out or transported to other rescues,” she said. “We have to wait and see.”

Valley Police Chief Mike Reynolds explained that the dogs had been discovered by a couple of code enforcement officers who were checking on an abandoned property on Crystal Springs Road in Valley.

“While they were checking this property, they heard some noise in the woods that sounded like a group of dogs,” he said. “They went to investigate it, and they found a clearing in the woods where they found 12 pitbull dogs chained in a circle.”

Reynolds said all the dogs appeared malnourished, and there appeared to be no food for them in the area. While some were near containers of water, the water looked dirty. He said they were all attached to what appeared to be logging chains. Fortunately, the dogs all had some form of shelter. Reynolds said that several of the dogs had open sores on their paws or bodies.

After the code enforcement officers called the VPD and animal control, the supposed owner of the animals allegedly came to the scene and admitted to owning the animals. He allegedly said he breeds and sells the dogs. As far as the VPD is aware, the man has no connection to the property, and the VPD doesn’t know who owns the property.

“Because of the way the animals were kept, their malnourishment and how rough they looked, we went ahead and seized the animals at that time,” Reynolds said. “Unfortunately, we have no place where we can take them. We contacted the humane society and humane shelters in four counties around, and we contacted several rescue groups, and nobody has any room for them.”

Reynolds said that as a result, the dogs had to be left in place.

Officers made sure they had food and water and checked on them. Rogers later said her organization found temporary homes for the animals.

The dogs were scanned for microchips on Thursday; none of them had any.

“From what I was told, at least eight of them appeared to be between six to eight months old,” Reynolds said. “It appears there is one older pitbull female, and it appears that she is the mother to most of the animals.”

While some of the dogs had injuries, Reynolds said they were more consistent with the environment they were in than with dog fighting.

Rogers said the dogs will receive veterinary treatment such as exams, heartworm tests, rabies vaccinations, fecal exams, deworming, shots for DHPP and Bordetella, antibiotics, spaying and neutering, etc. for around $300 to $400 each. After the court date, the dogs will be ready to adopt for $300 from New Hope Rescue, although some may be transported to other rescues.

Rogers said New Hope Rescue urgently needs money to care for the dogs. To help New Hope Rescue help these dogs and other animals, donate money to its PayPal account at nhrescueinc@gmail.com, to its Venmo account at NewHopeRescue, or to its CashApp account at $nhrescue. To donate cash or a check, text Rogers at (334) 332-9898.