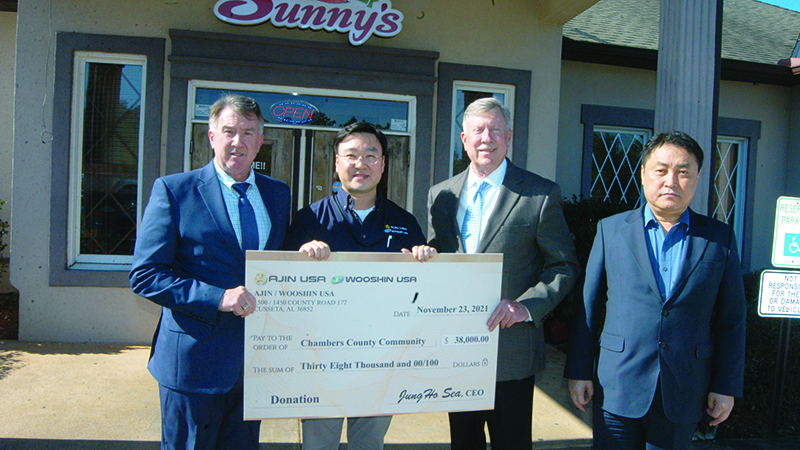 VALLEY — During the noon hour on Tuesday, two prominent industries in the Chambers County Industrial Park in Cusseta made their annual donations to assist local governments, local law enforcement agencies, fire & EMS services and a host of worthy causes. This was the twelfth consecutive year Ajin USA and Wooshin USA have been good corporate citizens in making these donations.

A check in the amount of $38,000 will be distributed among 13 local entities including the Chambers County School District, the Chambers County Sheriff’s Department, Valley Police Department, East Alabama Fire & EMS, Lanett Police, Fire & EMS, Huguley Fire & Water, the Christian Service Center, the Chattahoochee Fuller Center, the Valley United Fund, Chattahoochee Hospice, Valley Haven School, the Chambers County Library and EAMC-Lanier Hospital. The City of Valley was given a donation in support of the Christmas merry-go-round, which is marking its sixty-fifth holiday season this year.

The presentations were made in the banquet room at Sunny’s Restaurant. Afterward, everyone present was treated to a buffet-style lunch.

Ajin and Wooshin are two of the larger employers in Chambers County. Ajin has approximately 650 team members and Wooshin 180.

Mr. Sea thanked everyone for being there and said he hoped Ajin and Wooshin would be making an even greater donation next year.

Ajin USA was established on Feb. 14, 2008, with a theme of “diligent, creative development and technique cultivation.”

Wooshin celebrated its tenth anniversary in Chambers County this past September.