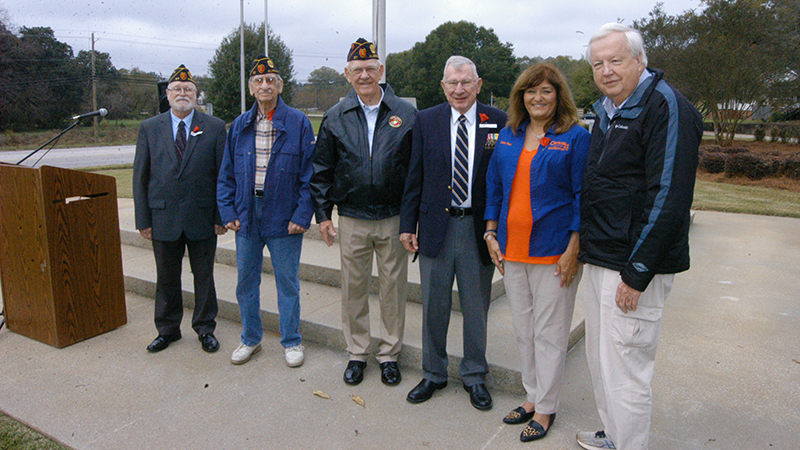 VALLEY — Rain was in the forecast for Thursday, and it looked like it might be on the way for the 11 a.m. EST Veterans Day ceremony at Veterans Park, hosted by American Legion Post 67. Fortunately, it held off, and the ceremony went on without a hitch at the place all Legion members consider hallowed ground. Four monuments on the site contain the names of 93 local men who died in military service during World War II, the Korean War, the Vietnam War and the Iraq/Afghanistan conflicts.

“This is a special place because of these four granite markers,” said Post Commander Lanny Bledsoe in opening remarks. “These 93 men went off to war and did not return. We honor their sacrifice and the contributions made by all veterans on this special day.”

A nice-sized crowd was on hand to witness the annual Veterans Day ceremony, and they heard remarks from Bledsoe, Valley Mayor Leonard Riley, State Representative Debbie Wood and the principal speaker for the day, Captain (ret.) Grant Carson, who served for 28 years in the U.S. Navy.

In introducing the mayor, Bledsoe thanked him for the job being done by the City of Valley in the upkeep of Veterans Park, which is located just south of the junction of Fob James Drive and Highway 29.

Riley said maintaining the park is something all mayors of Valley have done.

“It gives us great pleasure to keep it looking nice. It is a special place. There are 19 million veterans in the U.S. It’s only right to show them our support and gratitude not just on one day but throughout the year. The City of Valley deeply appreciates your service. We appreciate what you have done for our country and its people, and we enjoy keeping this park a beautiful place.”

Bledsoe thanked his right-hand man with the Legion, Post Adjutant Sammy Newton, 0n having done great work in staying in touch with all members during the lengthy COVID crisis and keeping up the membership. He also thanked his predecessor, Bobby Elliott, on the job he did as adjutant for a lengthy period.

Wood said that a great many veterans should appreciate personal freedom issues behind two new state laws enacted by the Alabama Legislature. One requires any student in an Alabama school who participates in sports to compete only in the sex of their birth. Another allows people who do not wish to be vaccinated to be exempted from it.

“They can take it to their employer,” she said.

Grant Carson grew up in Lanett and graduated from Lanett High School in 1953. His classmates included Millard Fuller, co-founder of Habitat for Humanity and the Fuller Center for Housing, and the Rev. Jim Auchmuty, who pastored one of the largest churches in the Birmingham area for five decades.

Carson was president of his senior class at Lanett High and went on to earn a degree in aeronautical engineering from Auburn. He joined the U.S. Navy following graduation and was commissioned as an ensign. He went on to serve in the Vietnam War and was awarded a number of decorations including the Bronze Star. He retired from the service in 1985 and then served as a senior engineer for the McDonell Douglas, a major U.S. aerospace manufacturing corporation and defense contractor.

Carson said it was nice being introduced by a famous author, making reference to Bledsoe’s recently published Shoal Creek series. He also noted that Tuesday was a birthday for the U.S. Marine Corps, where Bledsoe served for five-and-a-half years in the 1950s.

Carson said his Naval service gave him the chance to see the world. He said he’d lived in many different places during his service years. Those experiences made him appreciate being an American and having the standard of living this country offers. In contrast to other places he’s been, he said the U.S. was a neat and well-run country with a lot of wealth.

“Anytime you go to a Walmart, you are liable to see a $50,000 pickup truck, a new Cadillac or a Mercedes in the parking lot,” he said. “Americans are patriotic. They love to display the U.S. flag. I have lived in other countries and still don’t know what their national flag looks like.”

Carson told two stories illustrating the point that when times are troubled patriots step forward. One story took place in the late 1960s/early 1970s in the Los Angeles area. He was with the Navy ROTC program at UCLA at the time.

“The headlines in the newspapers at that time were about the war in Vietnam,” Carson said. “The war was unpopular on many college campuses, where many draft-eligible young men were students. “

A war protest got ugly at Kent State University in Ohio. The governor of the state called out the National Guard to keep it contained. Even though the guardsmen weren’t supposed to have loaded weapons, they fired at the students, killing four of them and wounding several more.

The protests on college campuses got worse, and it spread to UCLA, where Carson was on the staff. Rumors were going around that students were going to break in the Navy ROTC building and ransack it. An anti-war group was trying to break down the door to the building when dispersed by police.

“How do you think the newspapers reported it?” Carson asked. “They blamed it on the police. Then and now, there are bad journalists out there.”

“The students got their way,” he said. “They blew up the Navy building.”

There’s an old saying that all’s well that ends well, and things did work out better for the Navy after that.

“Six chapters of the Navy League in the Los Angeles area chipped in to build a new building,” Carson said. “They built back the Navy ROTC offices and classrooms. My new office was really nice. The building that was replaced was an old gym that had been built in the 1920s. I’ve always thought that to be an example of patriots stepping forward in troubled times.”

It was a tradition for a military parade to take place each year near the UCLA campus. At the request of anti-war protestors, the UCLA chancellor canceled it that year. There was a public outcry over this. Some didn’t want the parade and an awards ceremony that followed to take place; others supported it. The governor of the state at the time, Ronald Reagan, used his influence to see that it took place. He showed up at the event and brought John Wayne with him.

“That’s another example of patriots stepping up in troubled times,” Carson said.

“I have met a number of them,” Carson said of the Medal of Honor recipients. “They are very modest. They will tell you that they don’t consider themselves heroes, that they did what they did to save their buddies.”

Bledsoe said that he’d never met Carson until a few years ago. There is one thing they have in common. They have both been aboard the U.S.S. Mayfield. Carson was its captain at one time. Bledsoe was aboard the Mayfield while escorting some soldiers from Hawaii to the mainland.

“I’ve never smoked, but I bought a cigarette lighter saying U.S.S. Mayfield as a souvenir,” he said. “It has the name of the ship on it.”

Bledsoe joked that Naval ships were designed for short men.

“If you are over five-foot-seven, you will bump your head all the time,” he said.

“I am glad to have all of you here today for our program,” he said. “It’s the goal of our Legion Post to honor all who served, how they served and wherever they served. We appreciate our veterans. Let’s salute them and remember the 93 men whose names are on these markers.”

Gary Harris, who had opened the program by playing the National Anthem on a trumpet, closed it with “Taps.”