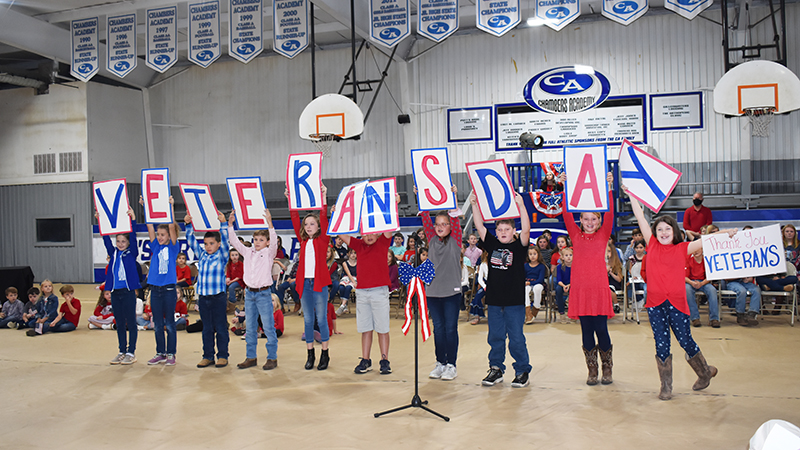 At the beginning of the program, grades K4 and K5 led the pledge of allegiance, Senior President Natalie Lovelace led the invocation, and SGA President Lauren Fuller sang the national anthem.

Before other grades performed, Abigail Dempsey performed “If You’re Reading This” by Tim McGraw in sign language.

At the beginning of his speech, Granger said he joined the Marine Corps when he was 19.

“My services started in 1992 to 1995,” he said. “I was stationed up in Northern Virginia at the Pentagon, where I joined a special team there, and I went from there down to Quantico, and then I was stationed overseas in Okinawa, Japan.”

“The one that really stands out to me and one that I really like, where we got our name, “Devil Dogs,” was in France, 1918 at the Battle of Belleau Wood,” he said. “It was one of the most brutal battles fought by American forces in WWI.”

“First Sergeant Dan Daly, a legendary two-time Marines honor recipient, famously shouted to his guys, ‘Come on, you ‘something.’ You can’t live forever.’ … It was during this famous battle that Marines showed the world that they were a formidable force willing to accept nothing less than victory.”

Granger emphasized the Marine Corps motto, “Semper Fidelis,” Latin for “always faithful.” He said it was because the military faithfully served the United States that Americans get to continue their way of life.

“So I’ll leave you with this — Semper Fi to each and every one of you,” he said. “Always faithful. Be faithful to your god, to your family, and to your country.”