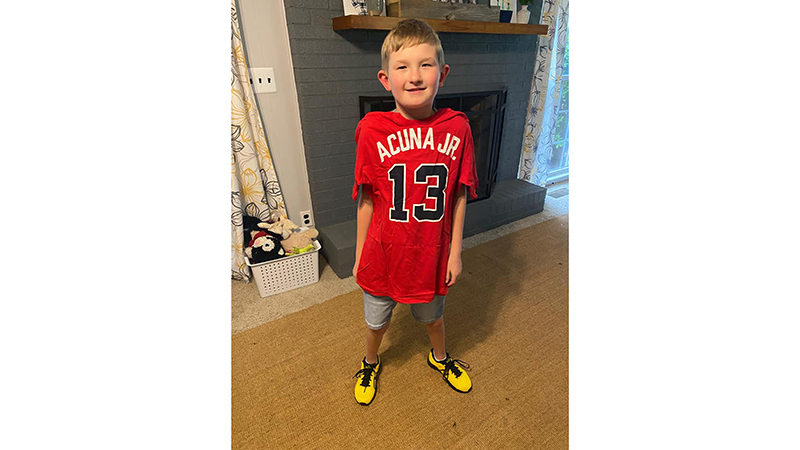 On Tuesday, Atlanta Braves fans across Chambers County were thrilled to see their team win the World Series for the first time since 1995, but arguably no one was more excited than 11-year-old Milner Letson.

Milner, who suffers from an intellectual disability, has become a gigantic Braves fan. The son of Jade and Jacob Letson, he attends Fairfax Elementary, but when he’s not at school, he loves to watch and cheer on the Braves.

“We keep saying, ‘The Braves won, Mil,’ and ‘They’re the champions,’ and he’s so excited,” Jade said. “He wore his Braves jersey yesterday to school and to church, and so everybody that saw him yesterday had something to say to him about their win.”

Jade and Jacob have been Braves fans their entire lives, but Milner developed his passion for the team recently.

Starting about two years ago, when everyone was quarantining, Milner’s family watched replays of Braves games almost daily. Milner fell in love with the players. When school started back, he would watch the Braves play before and after school.

“He would watch, and he just made this connection with all of these players,” Jade said. “He knows their names. It’s funny to us — sometimes you can’t even really see the player’s number or face or anything, but he knows it’s that particular player. He just all of a sudden made a connection. He does have an intellectual disability, so communication sometimes is limited for him. And so, for him to be able to talk about those guys playing and talk about what’s going on in the game, it actually makes sense, and it’s correct. [It’s] an awesome experience for us.”

“He wears bright yellow shoes and bright yellow batting gloves and different accessories outside of the actual uniform, and I think that just catches Milner’s eye,” Jade said. “He’s a wonderful ball player, and I think Milner recognized that with home runs and stuff like that early in the season and from previous seasons.”

During the World Series, when the camera would go over to Acuña in the dugout, Milner would holler out, ‘Acuña Jr!’

“He wasn’t even playing, but he loves him so much,” Jade said.

Milner even dressed as Acuña Jr. for Halloween this year.

Jade thinks Milner has been to three Braves games. He went to one in September to celebrate his 11th birthday and came home with an Ozzie Albies bobblehead.

She thinks that watching his sisters play softball has helped him understand baseball better and vice versa, especially in terms of learning the lingo.

“I think he just made that connection, which made him love watching the Braves even more because he understands what’s going on in the game,” Jade said. “He just loves it.”

Milner played t-ball for a couple of years.

“As you get older, seven and eight-year-old little boys are very competitive, and he just couldn’t really, at that time, didn’t understand the game,” Jade said. “He just wanted to be out there, and he loved his uniform, and he loved it out there with friends, but he didn’t really understand it, so we had to pull him out of that.”

He played a season with Miracle League, which is a baseball league for people with special needs.

The Miracle League canceled a couple of seasons because of the pandemic, according to Jade. She is hopeful they’ll open back up soon.

Milner enjoys throwing a ball in his yard with his dad and being outside when his sisters are playing softball.

Jade said she had hoped her family could go to the Braves parade on Friday but that it conflicted with her family’s schedules.

“I do plan to get some new Braves gear with ‘World Series Champions’ on it and things like that, maybe for some Christmas presents for both my husband and Milner,” she said.