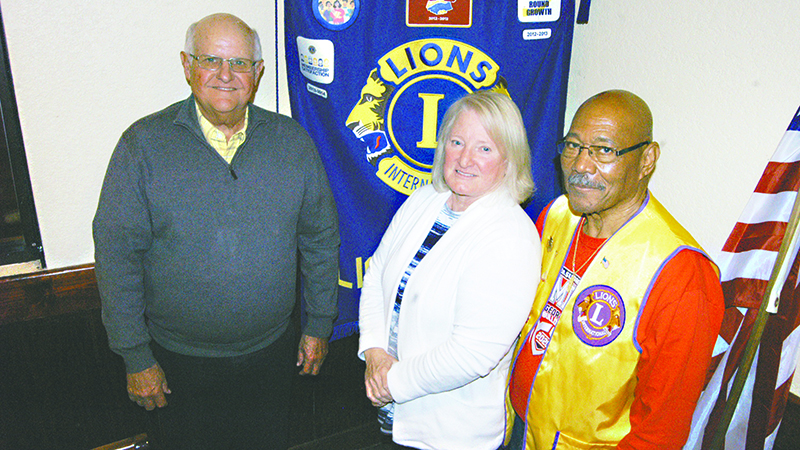 VALLEY — At the Monday meeting of the Valley Lions Club, newly installed Chambers County Commission Chair Debra Riley talked about county commissions in Alabama. She said they vary from county to county, but all seek to address the needs of the citizens.

Chambers County has six commission districts. All are roughly equal in terms of population, and the county has two minority safe districts. District One, represented by Charlie Williams, and District Two, represented by Doug Jones, each has an African American population of approximately 60 percent. The other districts are represented by Riley, Sam Bradford, James Williams and David Eastridge.

Two small states, Rhode Island and Connecticut, aren’t subdivided into counties. The nation’s largest state, Alaska, also does not have counties. Delaware has only three.

Alabama counties, said Riley, are political subdivisions of the state.

“We are not like cities,” Riley said. “We are a third tier down from the U.S. government with the state being second. Money flows through the state to get to us. Cities are different. They are independent.”

Riley said that it’s an honor for her to serve as he chairman this year.

“I have the opportunity to know what the leadership position is like,” she said. “We will respect people’s opinions and the direction they’d like to see the county go.”

It’s safe to say that the commission chairman has more on their plate than any other commissioner. There’s an agenda to be set for each meeting and lots of committee meetings to be part of.

“Right now we are working on redistricting,” she said. “We gained in population in the latest census. That’s good, and our task now is to see that we have six districts that are as close as they can be population wise.”

One issue Riley is concerned about is employee turnover. The average time for a county employee is six years, which is considered on the low side among Alabama counties.

“To provide the best services we can, we need to retain people for longer periods of time,” she said. “We need for salaries to be in line with job descriptions.”

This will likely mean pay raises but not this year.

“Some employees will be making more because of their job descriptions,” Riley said.

Riley said it’s good when the county and cities can work together to address common concerns. Chambers County, for example, has been working with the cities of Valley and Lanett in upgrading the lighting at Exits 77 and 79 on I-85. The state is very much involved in this, too, since there’s a need for better lighting from the state line to a new welcome center that will be opening soon.

The commissioners have been discussing how to spend the American Rescue Plan funds the county has received from the federal government.

“We are looking at the expansion of broadband in the county, but nothing has been finalized,” Riley said. “We have also been seeking advice on this from the Alabama Association of County Commissions (AACC),” Riley said. “I think there’s a need to get more water in our rural areas.”

Before it gets spent, the money does draw some interest.

“We have been working on some major issues,” Riley added. “We need to set a foundation for moving forward, to identify what our needs are and to work with grant writers. We need to get as much grant money as we can.”

Riley said it’s important the county looks out for each other.

“We have to get away from being solely interested in our district and think in terms so what’s best for the entire county,” she said. “We need to make decisions that are best for everyone.”

Alabama’s 10-cents on the gallon gasoline tax will mean more in the way of money to be spent on Chambers County roads.

“When the tax is fully implemented, we will be getting an additional $800,000 a year,” Riley said.

Rebuild Alabama funds have already been used in the paving of Combs Road in Valley and in some recent work on Veterans Memorial Parkway in Lanett and Huguley.