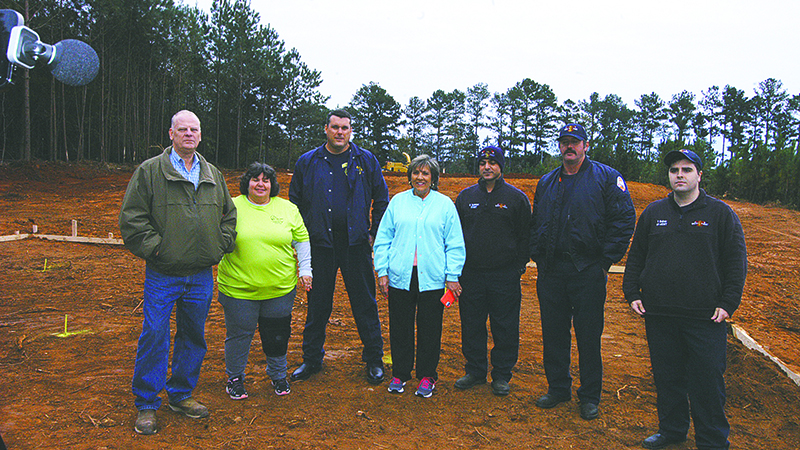 Helicopter pads being built — Two new concrete helicopter pads are being constructed next to the West Point Fire Department building on Kia Parkway. They should be ready to land helicopters by the end of the month. The project will cost an estimated $11,000, and donations are being sought to help fund it. The Chattahoochee Fuller Center Project (CFCP) has donated rebar and wire needed for the project along with a $5,500 monetary donation. “This is something that’s really needed,” said CFCP Executive Director Kim Roberts. “Anything you donate will help.” Shown above, from left, are West Point Mayor Steve Tramell, CFCP Assistant Director Robin Pierre, Lt. Brad Walker, CFCP Executive Director Kim Roberts, Sgt. Didar Suleman and firefighters Caleb Harrison and Thomas Baker.

WEST POINT — Since 2007, the Chattahoochee Fuller Center Project (CFCP) has been changing lives by building new homes people of modest means can afford. They have built a total of 66 of them in the Chambers, Troup, and Lee County region. The CFCP is now stepping forward to help save lives.

CFCP Executive Director Kim Roberts and Assistant Director Robin Pierre met with West Point Mayor Steve Tramell and West Point firefighters Friday morning to pledge $5,500 for the construction of two new helicopter pads that are currently under construction next to the city’s fire station on Kia Parkway. With that donation, the CFCP will be covering half of the cost of the two new pads. Donations are now being sought from the public to cover the remaining half. Checks can be made out to the Fuller Center and taken to the ReUse Store, located at 421 Gilmer Avenue in Lanett. Donations can also be made to the Fuller Center via Cash App.

What’s now being built are two 40-foot by 40-foot concrete pads. One will serve as a primary landing area for helicopters with the second one being a back-up landing site.

Trees are being cleared to improve visibility for the LifeFlight pilots who will be landing there. Helicopters who serve this area are flying out of LaGrange and Cusseta.

Roberts has a personal connection to helicopter flights. When she was four years old in 1966, she lost both legs in a lawnmower accident.

“Thank God they got me to the hospital in a helicopter that day,” she said.

At present, the LifeFlight helicopters have to land on the West Point Recreation Department ball fields, creating a potential safety issue. When a helicopter lands in an area with lots of public access, it often attracts crowds of onlookers who can make the critical care pickups more difficult.

The fire station on Kia Parkway is in a more remote location and much less likely to draw crowds. On rainy days, it’s much better to land a helicopter on a concrete surface than on a muddy ballfield.

Tramell said the pads will have lighting on each corner in the event of nighttime landings. The concrete will be grooved to help with drainage and to make for safer landings.

“There will be parking spaces for the arriving ambulances,” he said. “There will be ramps to roll the stretchers from the ambulance to the helicopter. Any trauma case that goes to Atlanta or Columbus will be able to land and take off from here.”

Tramell said the two pads should be finished and capable of landing helicopters by the end of the month.

In addition to the monetary donation, the Fuller Center has offered a helping hand in the form of rebar and wire that was left over in the recent homebuilding projects on Higgins Street in West Point.

“We still have some work to do on those two homes, but we are confident the two families will be able to move in by Thanksgiving,” Roberts said. “It will be a special time for them they can give thanks for.”

Roberts added that there is a big need for these two new helicopter pads.

“We have offered a good faith donation to get it started, but we need the public to help, too,” she said. “Anything you can donate will help.”

City Utility Department workers and firefighters have been doing the on-site work. They will be needing someone to pour and groove the concrete, and there are more trees to clear around the two new pads.