Compassionate teacher loves both the young and old 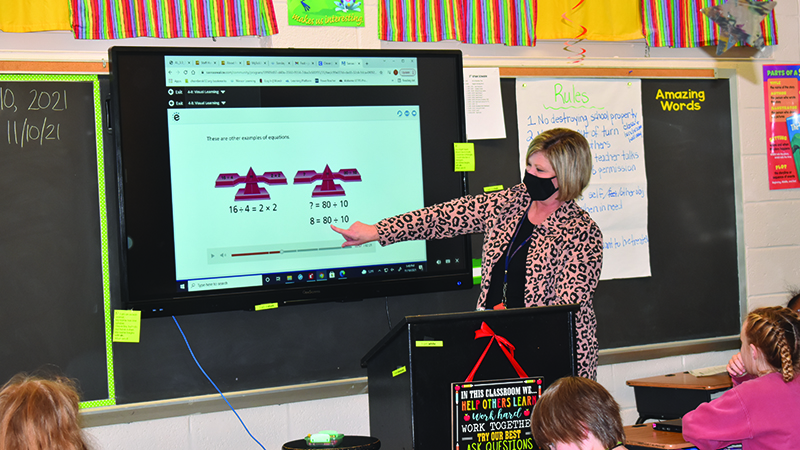 Making a difference: Above, Huguley Elementary Teacher of the Year Teresa Justiss is shown pointing to a math lesson.

“Both jobs have allowed me to be a community-involved person that can really help and give back to my community in some kind of way,” she said.

Justiss was recently chosen as her school’s teacher of the year, a title she said she’s won before. She said she thought many other teachers were just as deserving of the title.

“This year, they did it a little bit different,” she explained. “And they had some students and parents, anybody could really write in, and they allowed other people who had had us as teachers before to nominate somebody they thought was worthy of teacher of the year.”

She said she was touched by the letter of a former student, now in high school, who had won her the most votes.

“It meant so much just to know that a student thought of me the way he did, and the way he wrote,” she said. “I think all the other teachers also got emotional when they read the letter that he wrote about the type of teacher that he felt I was and how I had encouraged him and helped him.”

If her personality could be summarized in a word, it might be “compassionate.” As a teacher, Justiss draws upon her own childhood experiences for inspiration. Because she was very shy, one of her chief goals is to increase her students’ confidence.

“I love it when I have a kid who comes to me, and they’re very shy or very intimidated by other people, but by the end of the year, they’re raising their hand to be the first one to speak in front of other kids and share and what they’ve learned, because that tells me that I’ve accomplished something and helped them get over a fear that they shouldn’t have to have,” she said.

Justiss also found it difficult as a child to learn certain things such as continents, so she tries to make learning easy with engaging activities.

“We do silly dances,” she said. “We do whatever we can to remember stuff. And so that kind of thing sticks out to kids, and they remember.”

Justiss said she still hears fourth and fifth-grade students singing a song about the continents that she taught them.

She goes to great lengths to encourage kindness in her classroom.

“In my classroom, I don’t tolerate kids being mean to each other,” she said. “I want them to accept each other for their differences … We have kids who have different disabilities, and I want them to know they’re special and they can learn, too, and you don’t let anybody ever tell you that you can’t.”

Sometimes, Justiss will have students get to know others they don’t usually talk to.

“I give them plenty of opportunities to do things like that and to stand in front of the class and get used to speaking in front of people,” she said. “I don’t ever want another kid to go through what I had to go through because I was very intimidated.”

Justiss discourages kids from judging each other, encouraging them to reflect on the fact that they don’t know what their classmates are going through.

Her favorite things about teaching are seeing her students become more confident and grasp learning material.

Justiss’ teaching job has been more of a challenge this year, largely because her students spent months in remote learning due to COVID-19. She wants her students to know that she loves them even though she has to get onto them sometimes. She wants them to know she pushes them because she sees their potential.

“They were in first grade when they went home that year early, and some of them were homeschooled and did virtual for the whole year of second grade,” she said. “Some were part here, part there. So their maturity level is, I feel like a little bit lower than what normally comes to us in third grade, and I do, again, feel like it’s partially because of all of this.”

Justiss always gets to know her students and knows about their lives outside of school by communicating with their parents.

She has a bachelor’s degree in elementary education from Troy University and an associate’s degree in applied science in nursing from Southern Union State Community College.

She works part-time as a registered nurse for EAMC Lanier, visiting people in their homes.

“Most of the ones we see are elderly, and sometimes we’re the only people that go to see them,” she said. “I just love being there for them and taking care of them and loving on them and just letting them know there are people in the world who still care about them and that feel like they are individuals.”