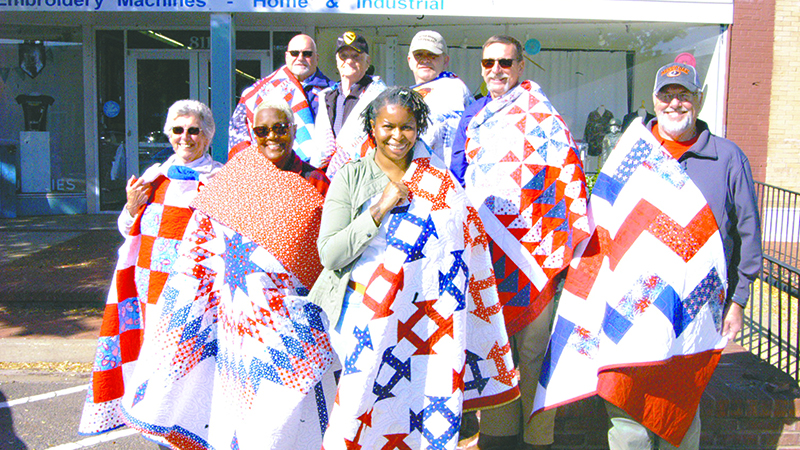 Honored: Eight veterans of U.S. military service were honored with Quilts of Valor presentations Saturday morning at sewingmachine.com in downtown West Point. In front, from left, are U.S. Army veterans Carol Bongen of Wedowee, Alabama, Rita Rowland of West Point and Angela King of Columbus. In back, l-r, are Curtis Grover of Valley, Sam Cofield of Huguley, Mitchell McMahan of Roopville, Georgia, Britt Welch of Lanett and Frank Williams of Phenix City.

WEST POINT — Eight veterans of U.S. military service who now live in the East Alabama/West Georgia region were honored at a Quilts of Valor ceremony this past Saturday morning at sewingmachine.com in downtown West Point. The honorees included six veterans of the U.S. Army, one from the Air Force and a former Marine. They included Army veterans Carol Bongen of Wedowee, Alabama; Sam Cofield of Huguley; Curtis Grover of Valley; Angela King of Columbus; Rita Rowland of West Point and Britt Welch of Lanett; former Marine Mitchell McMahan of Roopville, Georgia and Phenix City resident and Air Force veteran Frank Williams.

Bongen is a native of Long Island, New York and was in the Army for 22 years. She retired with the rank of Master Sergeant and now lives on Lake Wedowee. She fell in love with Alabama while serving at Fort McClellan in Anniston. Bongen joined the Army in 1961 and saw duty during the Berlin crisis and later on in Vietnam. She said that soldiers returning from Vietnam in the late 1960s should have received hazardous duty pay. “The college students didn’t like us back then,” she said.

In the late 1970s she was in one of the first units to receive separate but equal treatment as soldiers. She retired in 1982.

Cofield served with the First Cavalry Division in Vietnam and is now active with the Vet to Vet organization. “We meet at 8 a.m. every Thursday at the Lanett Church of Christ (across from Lanett High),” he said. “All veterans are welcome to come and see what we do. Hearts are touched when veterans open up to each other. We have worked with a lot of veterans who are still suffering from Post Traumatic Stress Disorder (PTSD).

Grover is a native of Dothan, Alabama and now lives on Lake Harding. He was in the Army for 30 years and saw combat duty in Iraq and Afghanistan. His unit lost 97 men in Afghanistan. He said that if he had the chance to do it all over again, he wouldn’t hesitate to serve his country.

“I want to thank you for doing this,” he told the quilting group. “This is a very moving experience for me.”

Opelika native Angela King served in Iraq and helped many fellow soldiers cope with the rough times they were having in a war-torn region.

Rita Rowland graduated from West Point High School in 1986. That was the school’s final senior class. The next year West Point consolidated with Troup High. She said she was proud to have served in the Army. At one time, she was in the clerical pool for the Army Chief of Staff at the Pentagon in Washington, D.C.

Britt Welch recently retired after 32 years in the Army. He has a personal connection to his new quilt. It was made by his mother, Shirley Welch, a member of the Georgia-Alabama State Line Chapter of the Quilts of Valor.

She kissed him on the cheek when she presented it to him.

A native of Franklin, Georgia, McMahan was in the Marines from 2001-2014 and did tours of duty in Iraq. At a recent fall festival, he stopped by a booth being manned by State Line Chapter spokesperson Sheila Simpson. He told her he had served in the Marines and would like to purchase a quilt from the chapter. He was crestfallen when she told him that they weren’t for sale, but his mood brightened when she told him they were given away to veterans and those in active service. She put him on the list, and McMahan received that quilt on Saturday. He’s a veteran of the First Gulf War.

Air Force veteran Frank Williams served between 1979 and 1992. He served as a crew chief aboard an aircraft that refueled planes in the air. He served in 98 combat missions in Operation Desert Storm in 1991. “I would do it all over again if I could,” he said.

West Point Mayor Steve Tramell thanked everyone for turning out for Saturday’s program. It was a standing-room-only group.” I want to thank the quilters for the work they do,” he said. “Veterans are so deserving of this.”

“We want to thank each one of you for your service to our country,” said Simpson. “We appreciate you being here in West Point this morning.”

Event planning and rental business gets new location in Valley