Family first in line for merry-go-round, has attended 13 years straight 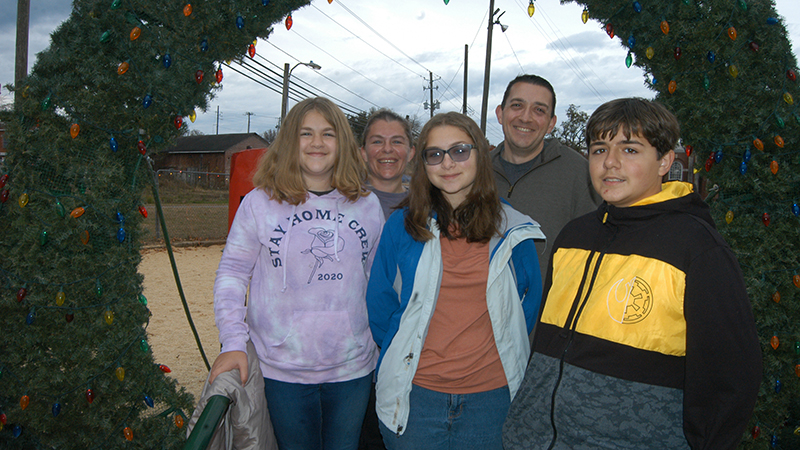 First in line: The Herstons were once again first in line for the opening day of the Christmas merry-go-round. The 2021 season started at 1 p.m. Sunday afternoon, and they were there an hour and a half early. They’ve been doing this since the children were attending Lafayette Lanier Elementary School, located across Highway 29 from the merry-go-round site. Two of the children are now at Valley High with the youngest at W.F. Burns Middle School. In front, from left, are Zoe, Cari and Sam Herston. In back are their parents, Katie and Jonathan Herston.

VALLEY — The Christmas merry-go-round has been on the old Langdale tennis courts since 2009. This year marks 13 straight years at that site, and for much of that time the Herstons have been first in line on opening day. They kept their streak going this year by getting there an hour-and-a-half before the 1 p.m. official start.

“We started doing this when our children were in school across the street at Lafayette Lanier Elementary,” said dad, Jonathan Herston.

Daughter Cari is now 16 and a junior at Valley High, son Sam is 14 and a freshman at VHS and daughter Zoe is 13 and an eighth-grade student at W.F. Burns Middle School.

“This is something we want to do every year,” Sam said of being first in line to ride, adding jokingly, “I think our parents had rather not be here an hour-and-a-half early.”

“We love coming to the merry-go-round every Christmas season,” Cari said. “It’s a family tradition for us.”

“It’s one of our favorite things of the year,” Zoe said.

Another Herston family tradition is to ride the merry-go-round four times on opening day.

“I know we are going to have a lot of people here today,” said Cooter Williams, who has worked the merry-go-round for Valley Parks and Recreation for many years now. “The first day is always wide open.”

Williams has worked the merry-go-round every Christmas season since 1978. When he first started, the Christmas music that fills the air was played on reel-to-reel tapes. In the time, he’s been there he has seen the transformation to the music being played on cassettes and later on CDs. It now comes over a smartphone via Bluetooth.

On opening day, Ballard Party Rentals provided train rides from the ball field through the Horace King Covered Bridge and back. They also had rides on their mechanical bull. They plan to be there every Friday, Saturday and Sunday through the merry-go-round season. They may be bringing their wipe out game sometime this season.