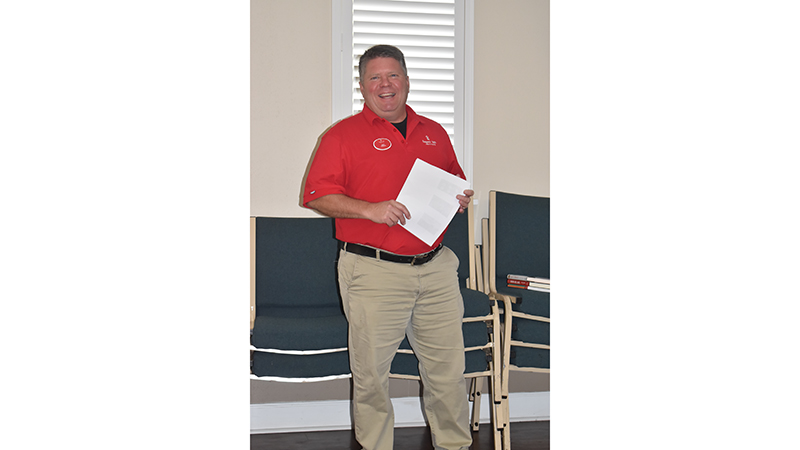 It’s no secret that younger generations — namely Millennials and members of Gen Z — are less religious than their elders. Some see this as a problem. At their Wednesday meeting at West Point Presbyterian Church, the West Point Lions Club hosted speaker Eric Turner, a representative from Christian organization Impact 360 Institute, who talked about how his organization aims to promote Christianity among young people.

“Our culture is really going through a lot of changes right now and has been for a long time,” Turner said. “The values that we grew up with aren’t really being held together in a way that we’re accustomed to seeing them. We need to be very intentional about how we influence culture, and this is really what Impact 360 is about — equipping that next generation.”

Turner said colleges and universities, even Christian colleges, are becoming secularized. To counter this, he said Impact 360 aims to help Christian students understand what they believe and why they believe it.

He shared a quote from late American philosopher Richard Rorty, former professor emeritus of comparative literature and philosophy at Stanford University: “We are going to go right on trying to discredit you in the eyes of your children, trying to strip your fundamentalist religious community of dignity, trying to make your views seem silly rather than discussable. We are not so inclusivist as to tolerate intolerance such as yours.”

“This is the world that students are going into …” Turner said. “So the question becomes, are we preparing them for this?”

Impact 360 Institute partnered with Barna to do a study looking at the views of Christians and non-Christians in Gen Z, defined as those born between 1999 and 2015. Turner said his organization did this because it’s primarily focused on attracting members of Gen Z to its campus.

“The percentage of people with a Biblical worldview declines in each generation,” he said.

He explained that study participants were made to answer nine questions to gauge their worldviews. Only 10% of Baby Boomers agreed with them, while only 4% of Gen Z did.

“I’ll give you a couple of the questions,” Turner said. “Here are the questions that they were asked: ‘Is Jesus the son of God?’ ‘Did Jesus die on the cross, and did he rise again in three days?’ We’re talking about fundamental, historical Christianity. ‘Is there a triune? Is there a trinity?’ And then, finally, ‘Is the Bible infallible?’”

Turner said Impact 360 aims to cultivate leaders who follow Jesus and that, conveniently, many members of Gen Z have leadership qualities such as wanting to influence change and getting involved in nonprofits.

On its Pine Mountain Campus, Impact 360 Institute offers four programs: Fellows, Immersion, Propel, and Masters. Fellows is a nine-month gap year experience, Immersion is a two-week transformational worldview and leadership experience for high schoolers, Propel is a one-week experience for high schoolers, and Masters is a program in which participants can earn an M.A. in leadership and spend two years as a graduate assistant.

The three pillars of Impact 360 are know, be, and live. Know refers to knowing Jesus more deeply. Be refers to being transformed in character.

“Our characters are flawed,” Turner said. “… our natural yearnings are not healthy ones. So we’re pretty much wired to take care of self, so we need to unwire that and substitute that with the life of Christ.”

Live refers to living a life of kingdom influence. Turner said this referred to the kingdom of God and meant being successful for the sake of others rather than oneself.

Turner said that if a student goes through the Fellows program, they’ll receive 18 months of college credit for Union University. He said that many schools, including Point University, give scholarships to Impact 360 students to attend their schools. Meanwhile, the master’s program is affiliated with North Greenville University.

Turner lives with his wife, Amy, and their two children, Luke and Katie, in Newnan, Georgia.