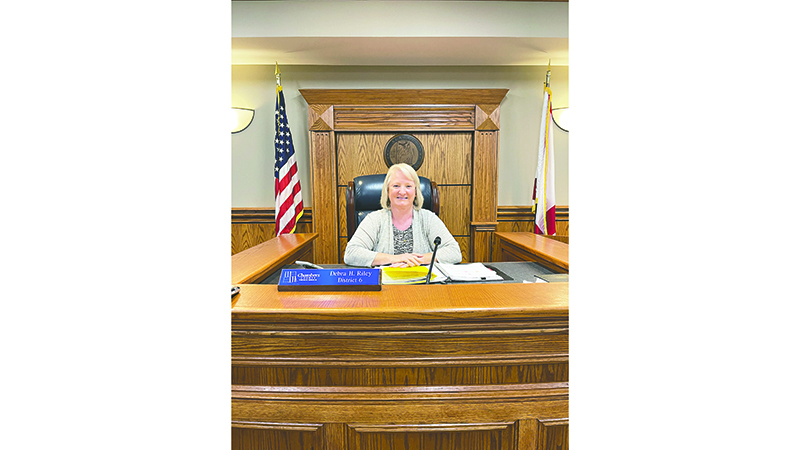 Passing the gavel: District 6 Commissioner Debra Riley takes the commission chair seat for the first time after being unanimously elected before the Monday meeting.

The commission chair is responsible for setting agendas and making sure the commissioners have all the knowledge they need in order to accomplish the goals the commission sets for the year.

“It’s an honor to get to do it,” Riley told the Valley Times-News. “It’s basically, my year to do all the legwork, to organize all the meetings, make sure we [commission] get all the education and knowledge that we need.”

Riley says the goals for the coming year will likely center around American Rescue Plan funds and available grants.

“I think what my directive is going to be from the Commission, and like I say it has to come from the group as a whole, is to gain a better understanding for us on how we can use the American rescue funds,” Riley said. “Because that money’s been in the bank now for a while it’s drawing interest, which is allowed, but Washington is just slowly filtering down rules and regulations for how it can be spent, and then it has to go to our state organization, which is ACCA and then it has to be looked at through Alabama law to make sure that what’s coming out of Washington is also in line with our rules and regulations as for how we can spend money.”

Outgoing chair, District 4 commissioner Sam Bradford highlighted just a few of the commission’s many accomplishments over the past year. Bradford began by acknowledging the hard work and dedication of all the county employees.

“None of this happens without teamwork, team effort from the lowest paid employee to the highest, everybody working together and a lot of good leadership,” Bradford said.

Some of the accomplishments Bradford spoke about began by shining a spotlight on the important results of the 2020 U.S. Census where Chambers County showed a population increase for the first time in 20  years.

“Chambers County population increased for the first time since 1980,” Bradford said. “Each person that is counted indirectly brings $1,600 to a county or city whichever it is in a year.”

According to the census data, Chambers County added 492 people, which would equate to $787,200 annually coming into Chambers County in the way of grants and other federally funded programs.

Bradford also highlighted the Evergreen salary study that looked at county employee salaries and compared them to surrounding counties. This study resulted in a salary increase for county employees that went into effect Oct. 1.

Another goal accomplished by the commission this year that Bradford discussed was the $3 million Phillips Road project that Bradford said is coming to an end soon as well as the lighting improvement along exit 79 that is scheduled to begin in February. The $2.6 million project utilizes approximately $120,000 of Chambers County tax dollars, $1.3 million in Rebuild Alabama funds and $1.2 million in federal funds.

Bradford also talked about the commission implementing an employee recognition program as well as the continued commitment to improving the infrastructure inside Chambers County.

Charlie Williams took a moment to thank Bradford for his leadership over the last year.

“We’re very fortunate to have the leadership of Mr. Bradford this year, very energetic and there’s no challenge he wouldn’t take on,” he said. “ Sam, I appreciate the job you’ve done, thank you.”

Riley adjourned her first meeting as chair by thanking the commission for allowing her to serve in the position.