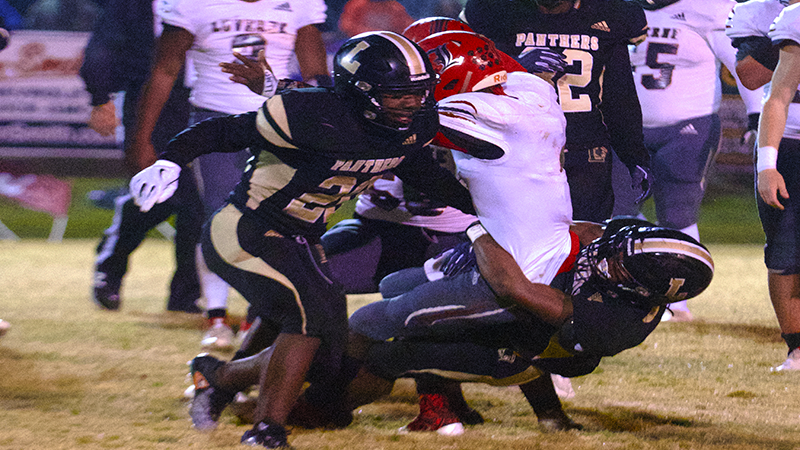 In what was thought to be a shootout turned into a slugfest Friday in the confines of Morgan-Washburn Stadium, where the Lanett Panthers defeated the Luverne Tigers 33-0 in the second round of the class 2A playoffs.

Early and often in the contest, Caden Story made his presence known on both offense and defense.

Both teams got off to a slow start in the first quarter, trading possessions, but neither team could put points on the board.

Despite the Tigers’ attempt to keep the ball out of the Panthers’ hands, Lanett began the second quarter with a sustained drive and set the tempo.

From the 11-yard line, quarterback Markavious Atkinsons hit Caden Story to take a 7-0 lead with 8:04 left in half.

“They were just trying to eat clock,” Story said. “Coach did a good job early on trying to negate that stuff, but I knew once we got on the board, I was confident that our defense had a really, really good gameplan.”

Less than two minutes later, the Panthers defense got involved in a big way. Bryant Story Jr. intercepted a Tigers pass and took it 58-yards to the house. The extra point went wide right, leaving Lanett in front 13-0 with 6:15 left in the half.

Again, both teams traded possessions, but the Lanett’s offense hit its mark again. This time it came on a screen pass from Atkinson to Caden Story, who plowed through the Tigers’ defense for the 30-yard touchdown with under a minute left in the half.

Tieko Williams stopped a Tigers’ drive with another Panthers interception at the 37-yard line and a kneel-down ended the half with Lanett leading 20-0.

The second half began much like the first — sluggish with several undisciplined penalties.

Coach Story said in the second half, he felt that the game was in hand and didn’t want to do too much, being up 20 points.

“I really just wanted to get out of here,” he said after the game. “I didn’t want to really do too much on offense because we had the game in control.”

That did not stop Atkinson from launching what would be his third touchdown pass of the night — this time hitting Tieko Williams down the seam for 28-yards.

Midway through the fourth quarter, things became chippy and the penalty flags began to fly and tempers began to flare.

As coaches calmed their players and the clock rolled on, Williams sealed the win with yet another pick-six, this time scoring from 38-yards out.

On offense, Atkinson finished the night 15 for 21, 257 yards and 3 TD passes. Bryant Story Jr accounted for 146 of those yards on six catches.

D’Quez Madden rushed for 60 yards on 22 carries and caught one pass for 20 yards on the ground.

Defensively for the Panthers, Javontae Cooper led the team with seven tackles.

Lanett goes on the road to face Highland Home at 7 p.m. central in the third round of the playoffs.