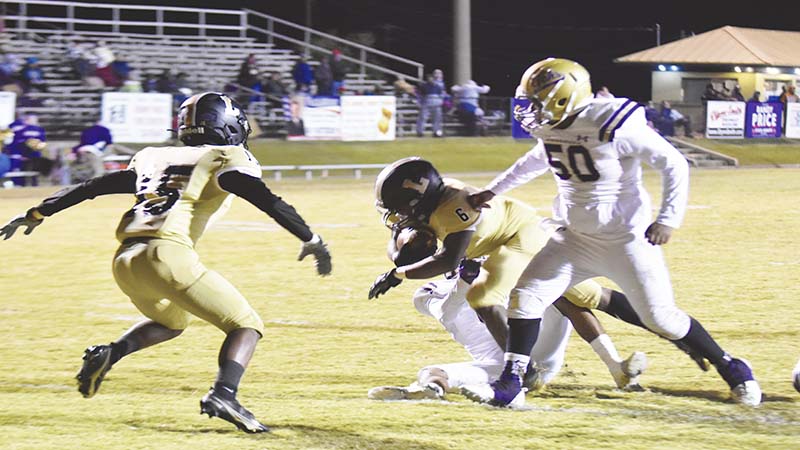 On a brisk Friday night at Morgan-Washburn stadium, the Lanett Panthers ousted the Geneva County Bulldogs in the first round of the AHSAA playoffs 18-0.

After cruising to victory in their last four matchups, the top-seeded and No. 1 ranked Panthers came out sluggish on offense. They found themselves in a defensive battle against the Bulldogs and 5-star Alabama commit Emmanuel Henderson.

The first quarter and much of the second was a game of turnovers and penalties for the Panthers, turning the ball over twice in plus territory.

The defense was the story, holding Geneva out of the endzone on a fourth and goal from the two-yard line with 6:05 left in the half.

Taking over on downs, Lanett marched the length of the field on the back of senior running back D’Quez Madden’s 45-yard burst up the middle. With under one minute left in the half, the Panthers set up from the Bulldogs two-yard line and senior Isaiah Green powered his way into the end zone for the game’s first score.

At halftime, head coach Clifford Story told his team they needed to pick up the intensity.

“I just told them the energy wasn’t there,” Story said. “We’ve just got to settle down, and don’t rush it.”

It appeared the offense responded, driving down inside the Bulldogs five-yard line, but missed a field goal attempt and the back and forth battle between the goal liine continued through the start of the fourth quarter with Lanett leading 6-0.

With 9:50 left in the game, Lanett started to do what they do best, put their foot on the gas and put the game out of reach. Junior quarterback Jarrious Goodman hit senior wide receiver Bryant Story Jr on a 34-yard touchdown pass, putting Lanett in front 12-0.

The Panthers defense stood their ground again, picking off the Bulldogs and capping the ensuing drive off with a 9-yard touchdown run by senior running back Tieko Williams. After the game, Story said the Panthers will get back to work this week and clean up some of the mistakes.

“We hadn’t had the starters play a full game in about three or four weeks,” Story said.

“Tonight, we had to be able to run our offense and be able to get consistent in some things, and we didn’t do that tonight. But we’ll get it cleaned up. We got through tonight.”

Story expects the Panthers to bring more energy as they host the Luverne Tigers Friday at 8 p.m. eastern.

Ariton defeated LaFayette in the first round of the class 2A playoffs 48-20 Friday night, ending a great year for the Bulldogs.