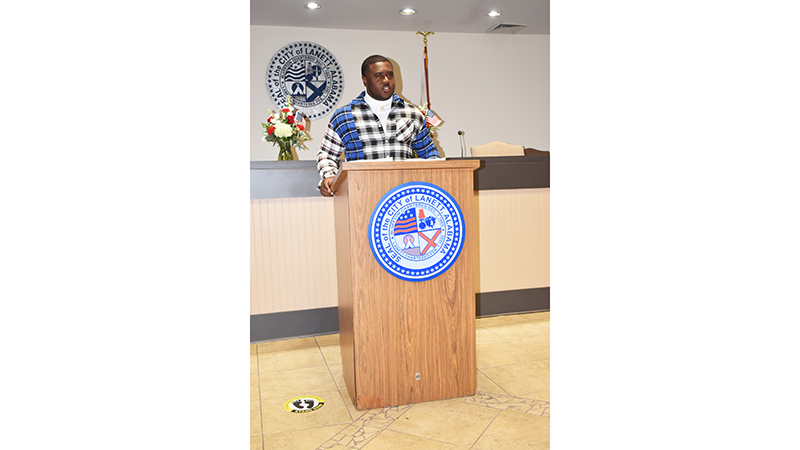 Honoring those who served: Maki Potts, who served in the U.S. Army National Guard, speaks during the City of Lanett’s Veterans Day program Thursday.

On Thursday, the City of Lanett honored veterans with a Veterans Day program at City Hall. The main speaker was Maki Potts, who served in the U.S. Army National Guard.

Potts thanked Lanett Mayor Jamie Heard and the Lanett City Council for choosing to honor veterans, and he thanked any veterans present for their service.

“I share the pride that you feel in being able to say we have served in the greatest military in the world,” he said.

Potts was born and raised in Lanett by a single mother and his grandmother. He participated in JROTC at Lanett High School and was the commander over the drill team in ROTC.

“Mahatma Gandhi once said that the best way to find yourself is to lose yourself in service of others,” Potts said. “He is saying that the essence of what we really are is caring for others. If we act selfishly, we’re not acting as our own selves.”

After graduating from high school in 2017, Potts enlisted in the Alabama National Guard.

“I never imagined that I would have the experiences that I had when I joined the military,” he said. “In May of 2020, the 2025th Transportation Company out of Jacksonville, Alabama was called to assist Border Patrol and Homeland Security with a Southwest Border Patrol mission.”

Potts said he was excited and nervous when he got the news. He left Lanett in October 2020 to go to McAllen, Texas, where he worked in 12-hour shifts three days a week. After a year went by, he and his coworkers apprehended around 4,200 migrants.

Potts also assisted with former President Donald Trump’s security detail. He and a teammate checked ID cards for anyone coming into the area while the Secret Service monitored the nearby perimeters. Though he didn’t get to meet Trump, Potts said it would be a day he’d never forget.

“As the veterans here today will agree, when we enlisted in the military, we had to be prepared to serve and protect others,” Potts said. “In doing so, we’re able to also find ourselves and understand our purpose in life. I am so proud to say that I’m part of this elite group of men and women.”

Potts was awarded a plaque.