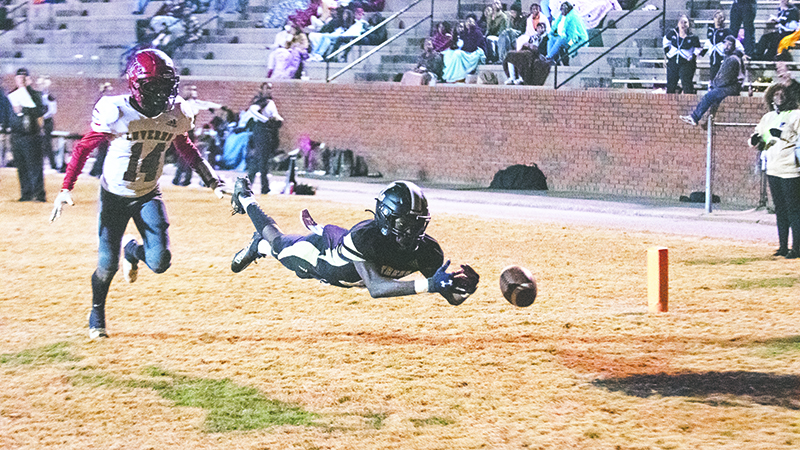 Laid out: A Lanett receiver stretches out for a pass Friday against the Luverne Tigers.

Lanett Head Coach Clifford Story says he always like to be playing when the grass turns brown.

Not surprisingly, Story’s Panthers are still playing as the calendar flips into late November.

On Friday, Lanett (10-2) will travel nearly two hours to take on Highland Home (7-5) in the third round of the 2A playoffs. The winner will move on to the state semifinals, while the loser will see its season abruptly end.

The Flying Squadron have seen an incredible turnout this season. After starting the season 2-5, Highland Home has won five in a row, including playoff victories over Orange Beach and Elba.

Interestingly, Highland Home finished third in region 3, behind Isabella and Luverne, but they are the last team from that region still playing.

All five losses by the Flying Squadron were to playoff teams.

It’s clear — at least based on the stats — that both teams are playing their best football season going into Friday’s game. During Highland Home’s five game winning streak, the Flying Squadron has only allowed 27 total points and only more than 7 points in one game. In the playoffs, they’ve outscored their opponents 60 to 7.

The winner will take on the winner of Clarke County and Corner. The other two games in 2A are Mars Hill Bible vs. Spring Garden and Southeastern vs. Cleveland.