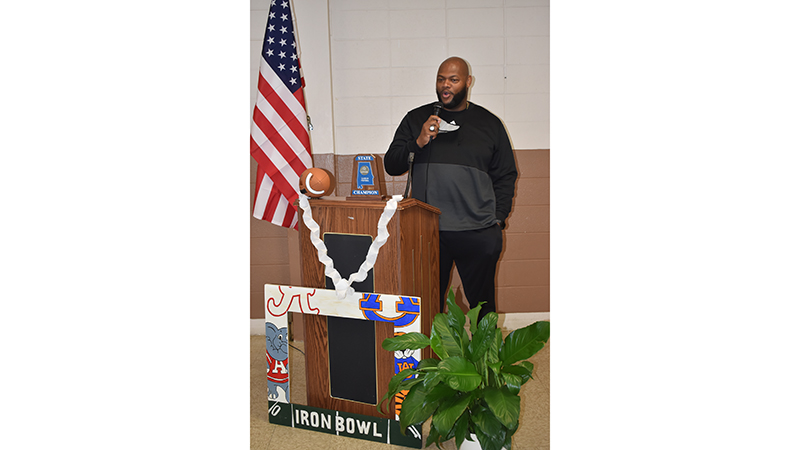 “I’ve had the privilege of being around this man and his family for the last five to six years,” Kincaid said. “And what he’s done in Lanett has been remarkable. I wish I had the privilege to play for a coach like Clifford Story in my playing days, because what he’s done for the school and this community has been inspiring. … So, ladies and gentlemen, if you would, our good friend, Lanett head coach, athletic director, friend, pastor and one of the best guys I’ve ever been around, Mr. Clifford Story coming up.”

Story said he felt honored to be at Spirit Day.

“So many people have always said, have always thought they had to leave their hometown in order to be successful,” Story said. “I beg to differ. I’ve always wanted to be able to come home and have an impact on my community.”

Story called himself “just a little country boy” from LaFayette, where he played football, basketball and baseball as a child. Story said he played football and baseball at Jacksonville State University and has an undergraduate degree in physical therapy. He said that at that point in his life, he didn’t consider becoming a coach. But soon, he began his coaching career at Weaver High School.

After Weaver High, Story coached football at Riverdale High School in Atlanta for three years and at Auburn High School for six years.

“And then that’s when everything began to turn for me,” Story said. “The Lanett job became open, and people started calling me and asking me, would I be interested in the job?”

Story decided to take a chance interviewing for the job. A few weeks later, he got it.

“And so, after that signing, we went to church, and we prayed and we prayed, and everything just fell into place from there,” he said, referring to his wife, Krisse.

Story said he’s been at Lanett City Schools for 13 years and isn’t looking to go anywhere else.

“I’ve been forced to share my ministry with this community,” he said. “It does my heart good … People say all the time that you’re [not] supposed to talk about Christ in school, but that’s a lie. I do it on a consistent basis. We pray on a consistent basis, and those kids know that we encourage them to go to church. We take them to church, and we want them to be a part of what it’s going to take to make it in this life.”

Story said he can’t say enough about his staff.

“I’m talking about from basketball, football, baseball, cheerleading, volleyball, band, everything … We’re all just one big family,” he said.

He recalled a time when it snowed on a state championship game day — his team’s first — in Tuscaloosa in 2017.

“I fell back on the bed,” he said. “I started to panic because I know what we liked to do, which was throw the ball around a little bit, that snow wasn’t in our favor.”

Story bought gloves and hand warmers for his team at Walmart. His team ended up winning the game 33 to 15.

“We are one of very few teams that have won a state championship at the University of Alabama and at Auburn University,” he said.

Story finished his speech by thanking his audience and saying, “Go Panthers.”