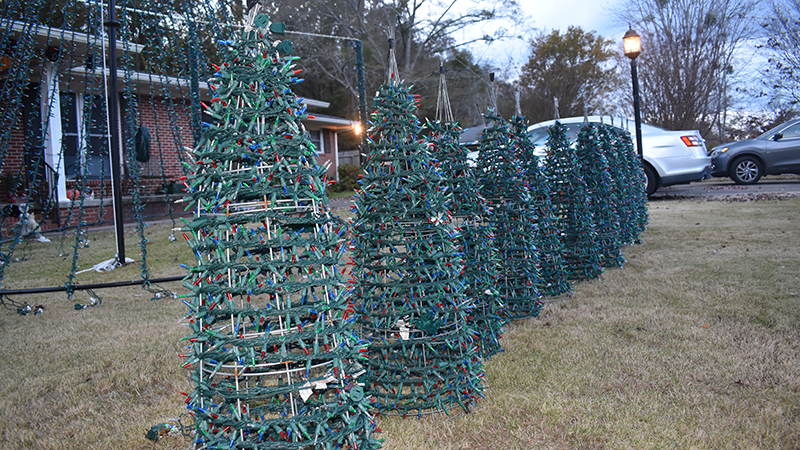 This December will probably be the last time Ruslan McCain’s light show will run in Valley. It will officially start on Wednesday, Dec. 1 at 6 p.m. EST at his parents’ house on 6305 26th Avenue. It will end on Monday, Dec. 27. McCain, an electrical engineer for the US Army Corps of Engineers, said he plans to move the display to Opelika, where he plans to move to from Auburn by next year.

“I encourage everyone to come out and enjoy it while it’s in Valley, if that’s where they’re looking at lights,” McCain said.

This year’s display will have a stage theme.

“I have 10 stage lights that will flood the yard this year,” he said. “And those are my new lights, and those are my intelligent fixtures because they can change colors on the spot, and they can dance, and they’re easily programmed.”

McCain started putting up Christmas lights at his parents’ house about five years ago. With his technical prowess, his display soon grew into a sophisticated, musical light show that could draw in around 500 cars a night.

“I started with one basic, big tree, and then it just kind of grew from there,” McCain said. “As a show, I only had just a display of constant lights on, and a lot of people started liking that. So then I moved into the animation part of it and started actually producing a show.”

This year’s display will have 60,000 lights and about 660 strands of lights. The main tree, alone, will have 32,000 bulbs. The lights will be synchronized to music, which guests can hear by switching to a radio station displayed at the house.

This will be McCains’ second year integrating LED lights into his show, which he said have better color than incandescent lights. The LED lights also pull less power than their incandescent counterparts. McCain said one of the incandescent-covered poles in his yard pulls more power than the entire tree. There are about 2,000 lights on the pole compared to the tree’s 32,000.

McCain estimated that his display has about 20 songs.

“I’ve got some non-traditional songs in there, as well,” he said. “‘Bad Boys’ is something I played for the police department to kind of give them a little tribute. I played ‘Dancing Queen’ to give some of the older generations something to dance to. The little kids may not understand it, but it will give something that the older people can actually enjoy.”

While the show is free, Ruslan sets up a donation box each year for his family’s power bill.

“I just tell my parents that if they can get enough to pay their power bill, then they won’t complain that I’m pulling so much power this year,” he said.