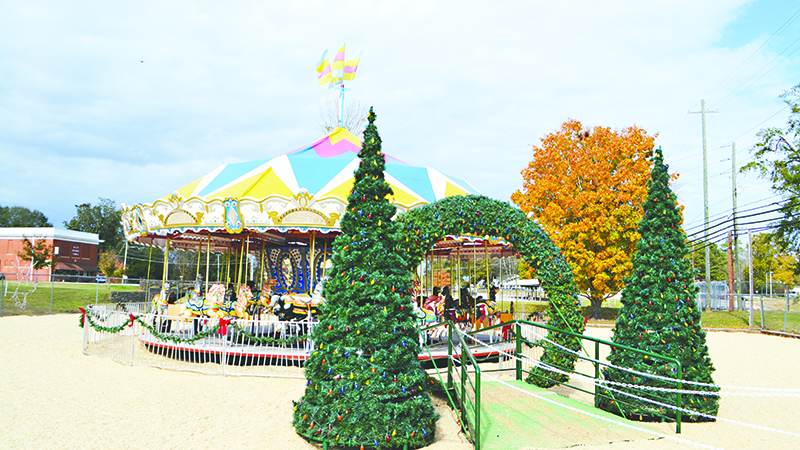 VALLEY — Anyone who was born the year the Christmas merry-go-round made its first appearance in the Valley has now reached retirement age. That first year was 1956, 65 years ago. From 1956 through 1967, it was set up on a youth baseball field across from Fairfax Mill. It was on Shawmut Circle for one year in 1968 before going back to Fairfax, where it remained every Christmas season until the recent past. In 2007, it went to Valley Sportsplex for a couple of years and since that time has been on the Langdale tennis court site every holiday season.

In recent years, the Christmas merry-go-round has been rented from Tinsley’s Amusements in High Hill, Missouri. It’s one of owner Richard Tinsley’s most treasured rides, and Valley is one of two places it returns to every year. The other is the Minnesota State Fair, where it’s set up inside the Mall of America.

That merry-go-round is Mr. Tinsley’s baby, and he makes sure it gets special treatment everywhere it goes. He will be in town this Sunday to supervise setting it up the following day.

Now in his eighties, Mr. Tinsley got hooked on the entertainment business when he sold tickets for a circus when he was nine years old. His company now has many rides, and he takes them all over the midwest during state fair season. He loves bringing enjoyment to all people, especially children.

The 65th running of the Christmas merry-go-round will start at 1 p.m. EST on Sunday afternoon, Nov. 28.

More than three million riders have enjoyed this holiday attraction in its first 64 years.

Some special activities will be taking place around the Christmas merry-go-round on Saturday, Dec. 11. The Sleigh the Course 5K run will start and finish on the nearby CV Railroad Trail. Santa Claus will be there for photos with the kids from 6:30 to 8:30 p.m. At 2 p.m. on Sunday, Dec. 12, kids can make their own gingerbread houses. Registration will be required.

A large Christmas tree in front of Valley City Hall will be lighted immediately following the 6 p.m. city council meeting on Monday, Nov. 29. Also to be lighted for the first time this year will be the Madonna and Christ Child, the Langdale Nativity and the Christmas lights along Highway 29. This will be the 60th year for the Madonna and Christ Child. It was designed by the late James Bledsoe and first displayed on the radio tower at the West Point Manufacturing Company’s Service Division in 1961. The Nativity debuted in front of Langdale Mill in 1948. It was later relocated to Langdale Meadow, where it remained for many Christmas seasons. Frequent flooding along Moore’s Creek damaged, and sometimes washed away, some of the Biblical era characters during that period.

The Nativity is now displayed off 20th Avenue across from the Langdale Methodist Church.