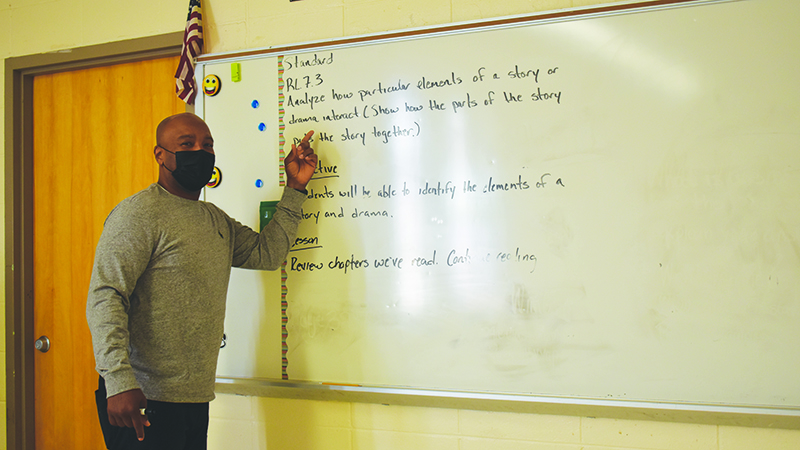 Thaddius Tucker, a seventh and eighth-grade English language arts teacher at John P Powell Middle School, isn’t sure why he was chosen as his school’s teacher of the year. It caught him by surprise when it was announced over the PA system one morning. But a conversation with him about his job reveals that he’s passionate about his students.

“I don’t view myself as doing anything special,” he said. “I don’t feel like I’ve went above and beyond anything that [my coworkers have] done.”

Tucker said students like him even when he’s disciplining them. He supposed this is because he can relate to them, has built a rapport with them, and respects them.

“You know, you have to give them respect,” he said. “They give it back, and you can get them to do their assignments.”

Students know they can talk to Tucker whenever they need to and that he won’t judge them.

“I also try to mentor and coach, if you will,” he said. “Steer them in the right direction or tell them what should be their next steps to solve whatever they have going on or just listening to whatever they need to say.”

When teaching literature, Tucker will pause during a story and ask who’s had an experience like the one they just read about, creating a teachable moment about life.

“When I’m teaching, I try to relate what I’m teaching to real-world experience,” he said. “That way, they understand what I’m teaching. And at the same time, they’re retaining things that they may be able to use later if that makes sense.”

Tucker’s favorite thing about his job is being with young people and seeing them understand new concepts.

“When you’re teaching and they don’t understand, and those moments when they finally get it, and I can stand one of them up there, and they can teach you,” he said. “That’s what I like. And being around them every day, trying to steer them in the right direction. I think every day; I get closer to maybe reaching one, changing a life.”

Tucker believes that the more a community gets involved in education, the better off students are. He’d like to see more people volunteer in education or parents simply visit their children’s schools.

Tucker said he’s been teaching six years total. He has a bachelor’s degree in sociology from the University of West Georgia and is three or four classes away from getting his master’s in education from Liberty University.