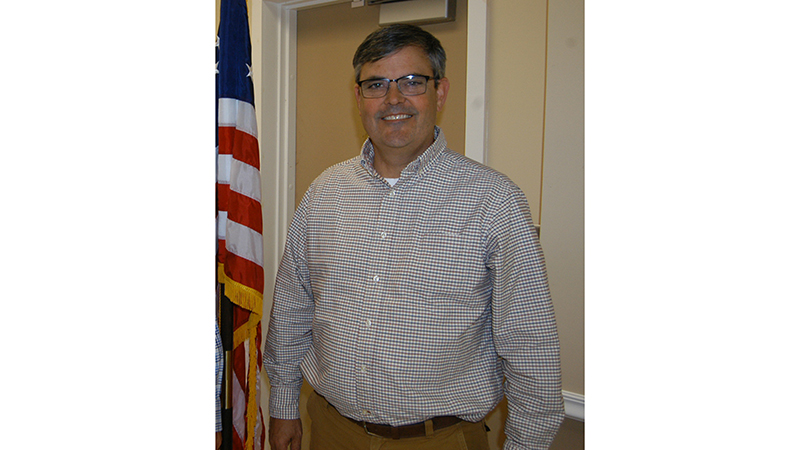 Newly elected: On Tuesday of this week, Joel Finlay was elected to a seat on the West Point City Council. On Thursday, he was the guest speaker at the noon-hour meeting of the West Point Rotary Club.

LANETT — Joel Finlay talked about his recent run for public office and some ongoing projects of Batson-Cook Construction at Thursday’s noon hour meeting of the West Point Rotary Club, held in the Jane Farrar Event Center in downtown Lanett. On Tuesday of this week, Finlay was elected to a seat on the West Point City Council. He’s a native of Albertville and a graduate of Auburn University. He’s been with Batson-Cook since 1996 and currently serves as a project executive.

Finlay told members of the club that people have asked him to run for the city council a number of times in the past, and he decided to throw his hat in the ring this year. He’s glad he did.

He started campaigning for office by putting up yard signs, and at the suggestion of West Point Mayor Steve Tramell made a lot of door-to-door visits to talk to city residents about West Point’s future. He went to such neighborhoods as Indian Hills, Roper Heights, Forest Park, Waterworks, Booker Hills and the 8th and 9th Street areas. One of the first people he met on his walking tour was Mike Crook, who asked him to visit his dad, Korean War veteran Paul Crook.

“He grilled me about why I wanted to serve,” he said. “I found that to be the best thing about running for office – the opportunity to meet people, go into their homes and to talk about the city’s needs.”

It didn’t hurt that his wife is a long-time teacher at West Point Elementary School. She’s well thought of by the families of children she taught.

While campaigning in the Waterworks neighborhood, someone told him to go and visit Dot Billingslea. He’s glad he followed that advice.

“I went to her house and told her I was running for city council,” Finlay said. “She invited me in and showed me lots of photos of her family and friends. I must have talked to her for more than an hour. She was so nice and so welcoming.”

He visited with another woman in Roper Heights who told him how much she loved living there.

“She told me that even if she won the lottery she wouldn’t move away from Roper Heights,” he said.

Finlay said it had meant a lot to him for people to be so hospitable.

“Both black people and white people invited me into their homes and were extremely nice to me,” he said.

Batson-Cook has been very successful in its 106-year run in West Point. A hardware store that was started by W.C. Batson and Edmund Glover in 1915 is still in business in its original location. The construction part to this business partnership started a few years later specializing in textile and mill village construction. Batson-Cook Construction expanded in the ensuing years to become one of the largest construction companies in the Southeastern U.S. It now has offices all over the Southeast and is getting close to $1 billion in annual business. One of the company’s offices is in Charlotte, North Carolina, where much of the city’s skyline was built by Batson-Cook.

The West Point office has 30 salaried and 30 hourly employees. Among the company’s local projects is the rebuilding of the Lanett High coaches’ offices, locker room and weight room which were lost to fire earlier this year. The company has been doing a lot of work for the Impact 360 Institute, located in Pine Mountain. The mission of the Institute is to cultivate leaders who follow Jesus. The campus is being built not far from the intersection of Highways 27 and 354. Named for the wife of Chick-fil-A founder Truett Cathy, the recently completed Jeanette Cathy Learning Center is on the north side of the campus. The Institute was founded by John and Trudy Cathy White with a goal of changing the lives of those who are trained there.

“I am proud to have been a part of this project,” Finlay said. “We recently built an 80-bed residence hall on the Impact 360 campus.”

Batson-Cook has been involved in an expansion at Steel Fab in Roanoke.

“We were fortunate to get that job,” Finlay said. “Steel Fab employs 220 people in Roanoke.”

The company does lots of hospital construction. One of its current major projects is at Northside Hospital in Atlanta. They are also working on an expansion at Prattville Baptist Hospital in Prattville.

“We are fortunate to have been doing a lot of work in the Montgomery area,” Finlay said.

Another local project is a new two-story tourism office in LaGrange. It’s located next door to city hall, and a grand opening is planned for the new building next week.

“It’s going to be a good addition to the City of LaGrange and Troup County,” Finlay said.

Batson-Cook Construction is working on a new building for Must Ministries in Marietta, Georgia. This charitable organization is doing great work in feeding the needy.

“They started out making sack lunches for people,” Finlay said, “but the health department said they couldn’t do that.”

They now have the health department’s blessings in the food they are providing.

Batson-Cook has an interesting project underway in Thomaston, Georgia. They are building a helicopter pad for the Upson Regional Hospital. It will be going in on top of a parking deck.

At present, helicopters transporting critical cases have to land on the opposite side of the highway from the hospital. Police have to delay traffic while the patient is carried from the helicopter to the hospital. In Auburn, Batson-Cook is building a 30,000-square-foot Publix grocery store, a new Target store in the downtown area and a five-story condominium complex near Toomer’s Corner.

One thing Finlay is passionate about is Scouting. He has served as Scoutmaster of Troop 9003, sponsored by West Point First Methodist Church, and has a way of inspiring his Scouts to become Eagles. The troop has produced 16 of them in recent years, a large number for a town of approximately 3,900 people.

Woman indicted on murder charges in case of two…