Panther can’t get going on offense, fall to Highland Home 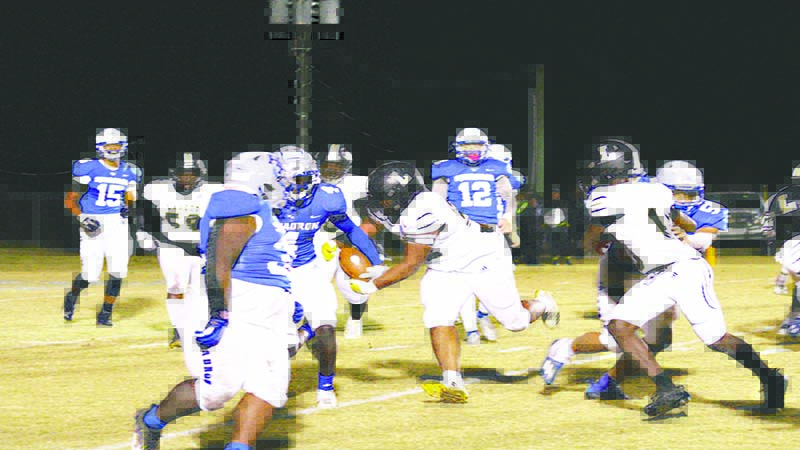 Lanett saw its season end in heartbreak Friday night when Highland Home converted a two-point conversion in the fourth quarter. The gutsy two-point call gave the Flying Squadron a 15-14 victory over the No. 1 ranked Panthers, resulting in one of the biggest upsets of the class 2A playoffs so far.

Highland Home was 2-5 through seven games this season but has now won five in a row.

The Panthers had plenty of chances but couldn’t consistently move the ball against the Highland Home defense.

The tone was set for the defensive battle right from the opening snap, when Highland Home stopped the Panthers for a loss of two on the opening play. Eventually, Lanett had to punt.

Neither team could score in the opening quarter, but KD Shepherd broke the scoreless tie with a touchdown to put the Flying Squadron up 7-0 in the second quarter.

With a mixture of Markavious Atkinson to Caden Story pass completions and runs by D’Quez Madden and Isaiah Green, Lanett drove inside the Squadron 5-yard line, but could not connect on a fourth and goal in the end zone, giving Highland Home the ball back.

On the ensuing drive, the Lanett defense came up big with a huge momentum play. Ja’Vontae Cooper made his presence felt when he ripped the ball from the Squadron running back and took it into the end zone for six. The extra point was blocked, bringing Lanett within 7-6.

The Flying Squadron drove into Panther territory in the closing seconds of the first half and as time was running took a timeout to draw up a last second hail mary. After the timeout, Highland Home quarterback Nick Diaz launched the ball toward the end zone where it was intercepted by Lanett and returned to the 40-yard line to end the half.

In the third quarter, Tieko Williams intercepted a pass from Highland Home. Madden was able to convert a key first down and Jarrious Goodman found the end zone to give Lanett it’s first lead at 12-7. The two-point conversion was good to make the score 14-7.

Highland answered and converted the two-point try to go up 15-14. Lanett had a couple of drives to answer but failed to convert a fourth and long with just over two minutes to play. Then, with one last hail mary throw to the end zone, the Panthers were intercepted, setting up a celebration on the Highland Home sideline.

The Panthers end the season 10-3, while Highland Home will play at Clarke County next week with the winner moving on to the 2A state title game.