Rebels get early scare but roll into state semifinals 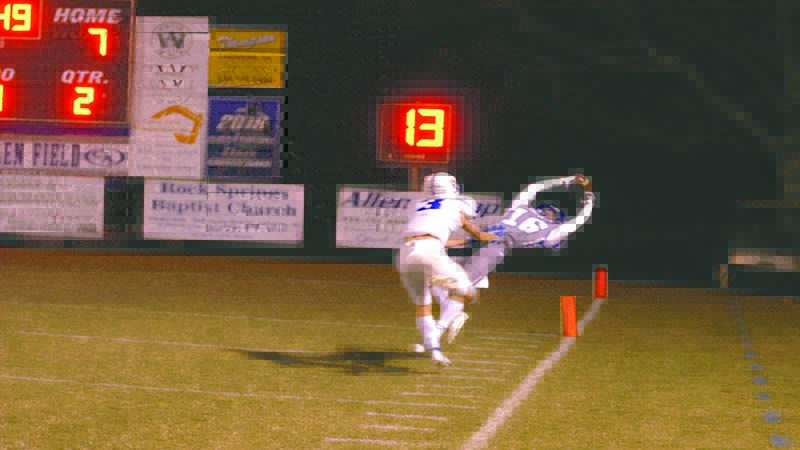 LaFAYETTE — The Wilcox Academy Wildcats put a scare into the Chambers Academy Rebels by taking a 7-0 first quarter lead in first-round playoff action Friday evening at Torbert-Allen Field, but the Rebels would seize control and improve their overall record to 10-1 on the year. A couple of dramatic pass plays on the final play of the first quarter and on the final play of the first half had the Rebels up by two touchdowns at halftime, and Chambers rolled to a convincing win by dominating the Wildcats in the second half. The final score was 42-14.

Senior quarterback Jo Jo Hendrix played one of his best games, completing 12 of 18 passes for 188 yards and four touchdowns. Jordan Benbrook had his usual strong game, running the ball 17 times for 129 yards and a touchdown.

John White caught five passes and had three scores for the Rebels. Wide receiver Jeremy “Spud” Conway had four receptions for 66 yards and a touchdown.

On defense, Kross Colley led the way with 12 tackles and a sack. Gavin Kight celebrated his 17th birthday with 10 tackles and two sacks. Ashley Chambers had eight tackles, and Hayden Hurst and Brandon Moncus each had seven.

“We started slow, but made the adjustments we needed to make to take control of the game,” head coach Jason Allen said. “I was proud of the way our guys responded to some early adversity.”

The visitors came ready to play. They took the opening kickoff and drove it 79 yards to take the early lead. Dual threat quarterback Cooper Dixon led his team down the field on some key runs, and on a fourth-and-nine play from the Rebel 34 found Wes Smith open near the goal line on a long pass play for the game’s first score. A successful PAT made the score 7-0 in favor of Wilcox Academy with 5:55 left in the first quarter.

Chambers moved the ball steadily down the field on their first possession. Runs by Benbrook and receptions by White highlighted the drive. Chambers got the ball inside the 10 before it went over on downs at the seven when a pass from Hendrix to T.Y. Trammell came up a couple of yards short of the first down.

Pinned deep in their own territory, the Wildcats couldn’t move the ball against a stiff Chambers defense. They punted on fourth and nine from the eight, and the Rebels put the ball in play on the Wilcox 36 with enough time for one final play in the opening period.

Hendrix took a deep drop and found Conway running in the open near the north end zone. He lofted a beautiful pass, and Conway hauled it in just inside the pylon on the home side of the field. The 36-yard touchdown pass cut the Wilcox lead to 7-6, and Cayden Haley tied it with a successful point-after try. At the end of one quarter of play, the game was tied at 7.

The Rebels began to take control of the game in the second period. After holding Wilcox to a punt on their next possession, Chambers put the ball in play on their 28 and moved it 72 yards for the go-ahead score. The running of Benbrook highlighted the drive mixed in with some nice runs by Conway and Trammell. Benbrook got the touchdown on a four-yard run off the left side of the line on third-and-three play. Haley’s PAT made the score 14-7 in favor of Chambers with 5:20 left in the half.

Wilcox was able to run much of the remaining time off the clock and appeared to be going in at halftime down by just one score, but the Rebels had other ideas. They got the ball back on their 45 with just 33.2 seconds left in the half.

The Hendrix-to White show moved the ball down the field and into the end zone. A third-and-ten pass play moved it to the Wilcox 44 and a first down. Another Hendrix-to-White pass got it down to the 21 with 5.5 seconds left.

An incomplete pass left just 1.2 seconds in the half, but on the final play before intermission, White pulled in a scoring catch in the right corner of the south end zone.

He outfought a Wildcat defender for the football and held the ball high in the air while lying on his back in the end zone. Haley’s PAT made the score 21-7 Chambers at halftime.

The Rebels built on that lead in the third quarter with White continuing his brilliant play. He ran the second half kickoff to the Wildcat 41 to give Chambers great field position. Runs by Benbrook and Trammell got it closer, and White finished the drive with a 25-yard TD catch down the far sideline.

Haley’s PAT made the score 28-7 in favor of Chambers with 7:54 left in the third period.

A quarterback sack on third-and-long by Ryan Smith forced Wilcox to give up the football one more time. Chambers pressed their advantage with another score to make it 35-7 with 4:32 left in the period. This time Trammell got loose around right end on a long run to put the Rebels up by four touchdowns.

Each team added one score in the final period to make the final score 42-14.

The win advances Chambers to a second-round matchup with Escambia Academy, the team Chambers narrowly defeated in the 2020 AISA 2A state championship game.

The game will be at Chambers.

“We will have to play our best game of the season to beat them,” Coach Allen said. “We can’t hurt ourselves with mistakes and will have to execute on a high level.”

The winner of next Friday’s game will advance to the AISA 2a state championship game to be played at Cramton Bowl in Montgomery.