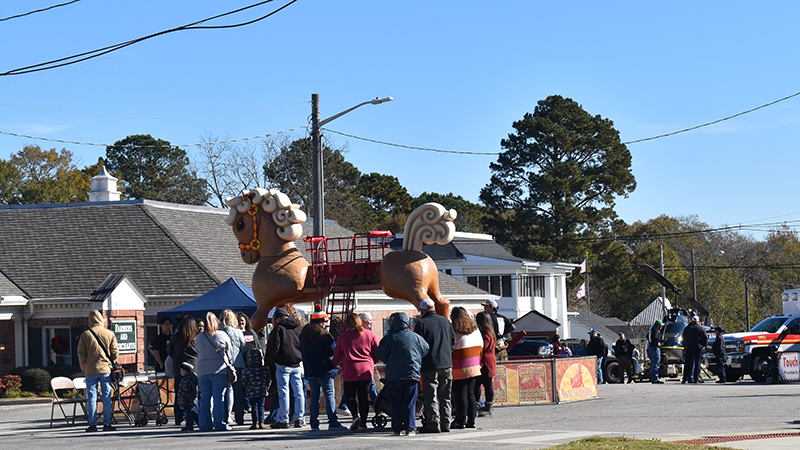 Lining up to ride: A line forms at what has been dubbed the “World’s Largest Rocking Horse” Saturday. The second annual Rockingfest took place in LaFayette.

On Saturday, the Greater Valley Area Chamber of Commerce held its second annual Rockingfest on the Square, a winter-themed festival, in downtown LaFayette. Blocked-off streets were filled with over 75 vendors selling food, gifts, and other items. There were also attractions for all ages.

Among the attractions was a giant rocking horse that visitors had to climb a ladder to mount. Workers would push and pull its feet to make it rock. There was also a colossal Everest Climb N’ Slide, an inflatable slide that measured 44 feet by 45 feet by 30 feet, according to the company that rents it out. Other attractions included skating on fake ice, a bouncy house, and a toboggan tunnel, which was an inflatable through which children rode plastic sleds. A polar bear mascot wearing a Coca-Cola scarf walked around greeting people. Guests could also take pictures with Santa, and there was a “touch-a-truck” attraction where children could see, touch and explore vehicles such as those used by first responders.

The event was free and drew in people from all over. Jennifer Hudson and her daughter, Aubrey Hudson, drove to the event from Auburn.

“I saw it on Facebook, and we decided to drive out here and see what it was about,” Jennifer said, standing in line with Aubrey for the rocking horse.

Aubrey said she had enjoyed the toboggan tunnel.

“I mostly came out here to look at the crafts, so I’m looking forward to spending some money,” Jennifer said.

Emma and Kim Jennings enjoyed shopping with their dog, Jax.

“We got some dog treats for him, and then we went to the Gimme Some Sugar boutique over there,” Emma said.

Emma and Kim said they looked forward to seeing people she hadn’t seen in a while.

Abby Adams, owner of Auburn Opelika Dental, said her business has held a craft booth at the event last year and this year. She and her daughters enjoyed ice skating, the Everest Climb N’ Slide, the bouncy house, and the rocking horse.

“My daughters are five and three, and they’ve been asking about the rocking horse since last year,” Adams said. “They loved it.”

GVACC Executive Director Carrie Royster said everything about the event went as planned.

“I just want to send out a big thank you to all of our volunteers — that was our board of directors, our ambassadors, our junior ambassadors — for their time and hard work on Saturday,” she said. “This event would not be possible if we didn’t have our volunteers helping. And I want to thank the community for their support, and I hope to see everyone next year.”