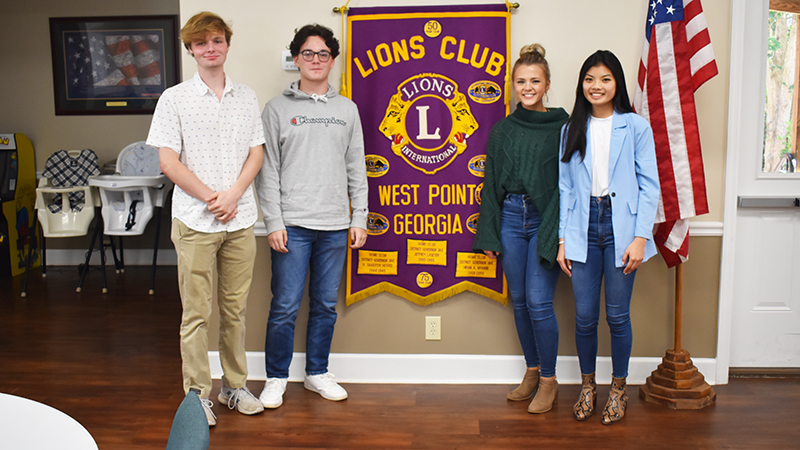 The thespians gave the same performances they had been awarded medals for.

Garner Dorminy and Brady Spradlin performed as two old men, Gil Faizon and George St. Geegland, respectively, in a scene from “Oh, Hello,” popularized on Comedy Central’s “Kroll Show.” Faizon said he and Geegland lived on the upper west side of Manhattan. The characters proceeded to describe themselves.

“You know when you get to the bottom of a tub of hummus, and you can’t put your carrot in there, so you got to use your fingers to scoop it out?” Faizon said in a thick Manhattan accent. “Bam, that’s us, baby!”

“I’m the type of man you’d find at a party going through the coats,” Geegland said. “I’m neither Jewish nor a woman. But like many men over the age of 70, I’ve reached that point in life where I’m somehow both. I was born in Providence, Rhode Island, and I’m responsible for reintroducing the poliovirus to my school district.”

Geegland said a fun fact for the performance was that he was on competing medications.

“I am a Tony Award viewing actor,” Faizon said. “And whether I live in your building or not, I am somehow on your co-op board. I’ve made most of my work as a voiceover artist, and I was very nearly the official voice of CBS.”

Geegland asked Faizon to perform his CBS audition for the audience.

“Oh, I don’t know if the audience wants to hear it,” Faizon said.

The audience urged him to do it.

“I was going to do it regardless, you know,” Faizon said.

“This is CBS, baby!” he exclaimed after a less enthusiastic personal introduction.

Faizon said that after breaking it to him that he didn’t get the job at CBS, Geegland wrote a play for him to star in. Geegland said the first play he wrote for him and Faizon to star in was inspired by “and directly stolen from Sam Shepard’s “True West,” but his was called “True Upper West.”

“Now, famously in the revival, you’d see Reilly and “Phil Sey,” Geegland said, before he and Faizon pretended to cry. “Phil Sey” Hoffman…”

“See, it’s hard because we get chocked up on cue at the same point, every show,” Faizon said.

After Dorminy and Spradlin’s performance, Charlie Key sang “In My Dreams” from the musical, “Anastasia.”

Taylen Ly sang “Much More” from the musical, “The Fantasticks.”

Key also performed a monologue as Jane from “‘Dentity Crisis,” in which she recalled being taken to see a ridiculous “Peter Pan” performance at the age of eight. She said strange things kept happening. When children would fly, their ropes would break, and the crocodile that chased Captain Hook seemed to be a real crocodile. Jane said the crocodile fell off the stage, killing several children in the front row.

“Wendy seemed to get fatter and fatter until finally, by the second act, she was immobile and had to be moved with a cart,” she said.

Jane said that after Tinkerbell drank poison to save Peter Pan’s life, Peter Pan urged the audience to clap to show they believed in fairies, which might save Tinkerbell’s life. Even though the children clapped very hard, Jane to the point of bleeding, Peter Pan announced that Tinkerbell had died because they hadn’t clapped hard enough.

“Well, and everybody started to cry,” Jane said. “And then the actress just walks off stage and refused to continue with the production until finally, they had to bring the curtain down.”

After the performances, Bill Dorminy stated that the thespians do their competitions in rooms like the one they were in, which had no stage. He argued that it’s probably more nerve-wracking to perform in a regular room than it is to perform on a stage because when on a stage, the audience is usually obscured by darkness.