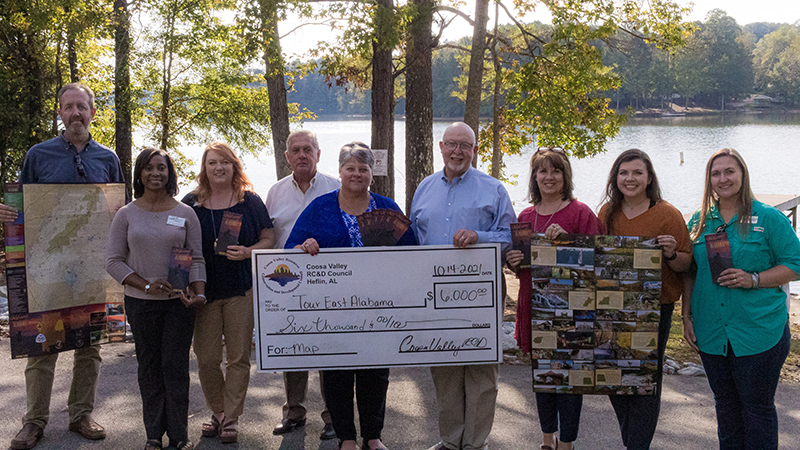 In a press release, the Tallapoosa County Tourism was awarded a $6,000 grant from Coosa Valley Resource Conservation and Development Council (RC&D) to be used for a regional map for Tour East Alabama (TEA).

Tour East Alabama is a volunteer organization that consists of eight counties in East Central Alabama (Calhoun, Chambers, Clay, Cleburne, Coosa, Randolph, Talladega, and Tallapoosa) whose main objective is to promote the area and its trails, parks, museums, lakes and rivers through their print and social media platforms. These counties represent eight of the eleven counties in the Coosa Valley region.

For the past eleven years, local chambers of commerce, economic development councils, cooperative extension agencies, state parks, the U.S. Forest Service, destination marketing organizations (DMO’s) and other organizations have been educating the local communities on how to use tourism as an economic engine. Tour East Alabama recognizes that the region has the natural and cultural resources to become a successful tourist destination. As resources have allowed, Tour East Alabama has been educating local communities about the value of tax dollars and jobs that tourism can bring to their communities through new and expanding businesses.

“We were proud to fund Tour East Alabama. The funds were used to produce a high-quality tourism map that covers eight of the eleven counties that Coosa Valley RC&D serves. The map captures and showcases points of interest in some of our beautiful rural counties. This is another great example of entities partnering to produce and release a great product for our citizens!” the release said.

Alabama State Representative Steve Hurst spoke about how important the grant is for East Alabama.

“As an Alabama State Representative of District 35 and also being a member of the State Park Board, I realize how important tourism is to our state. This resource will have quite an economical impact on East Alabama, which is extremely important and needed,” Hurst said.

The coordination and design of this regional map was conducted by Lake Martin area artist John Denney and by DeForest Tuggle with Tallapoosa County Tourism. The eight counties represented on the map provided information and photos showcasing their county’s natural and cultural resources. The map project began a couple of years ago with the City of Oxford. With the leadership of Mary Patchunka-Smith, the City of Oxford map grew to the eight Tour East Alabama counties with the goal of creating a marketing product to promote the entire region. Sandra Fuller, Director of Tallapoosa County Tourism and Tour East Alabama board member, applied for and received the RC&D grant that brought this map project to fruition.