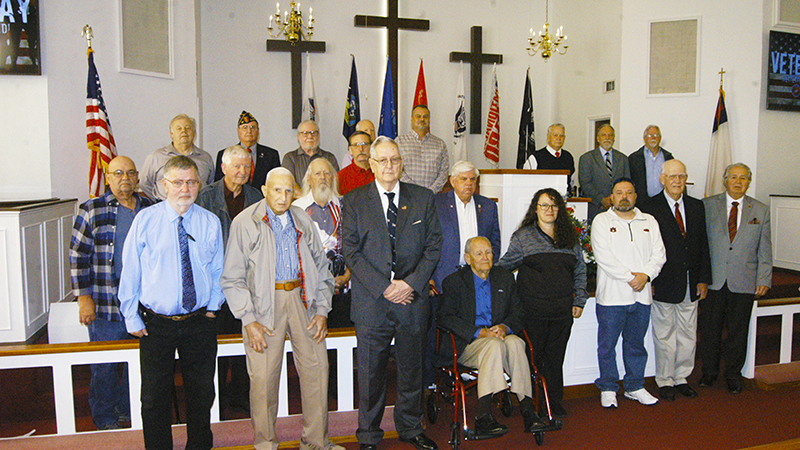 Veterans honored: A total of 21 veterans of military service were honored at Sunday morning’s annual Veterans and Military Appreciation Day at the Lanett First Church of the Nazarene.

LANETT — A total of 21 local veterans were honored for their service to our nation at Sunday morning’s annual Veterans and Appreciation Day at the Lanett First Church of the Nazarene. Each served in the Army, Navy, Air Force, Marines, Coast Guard or National Guard.

The church has been hosting this special event for more than 20  years now. It takes place each year on the Sunday morning before Veterans Day. There was no program last year because of Covid-19.

Mayor Steve Tramell of West Point, Mayor Jamie Heard of Lanett and American Legion Post 67 Commander Lanny Bledsoe were there to thank the church for honoring our veterans.

“Thank you for doing this,” said Tramell. “It is so right to honor our veterans, and we don’t need to do it just for special occasions like Memorial Day or Veterans Day; we should do it throughout the year.”

Tramell commended members of the Georgia-Alabama Chapter of the Quilts of Valor for their work in making quilts for local veterans and honoring them on the first Saturday of each month sewingmachine.com in downtown West Point. “We honored eight veterans yesterday,” he said. “Anyone who knows a veteran they would like to see honored by this local program should contact sewingmachine.com to be put on a list.”

Tramell read a City of West Point proclamation honoring veterans for the upcoming Veterans Day holiday. “Thank you for inviting me today,” he said. “It’s an honor for me to thank our veterans for all they have done for the American people.”

Mayor Jamie Heard thanked the church for having this annual observance. “I want to thank the committee for asking me to speak today,” he said. “I’m glad to be here this morning, and it’s a privilege to talk about what our veterans mean to our country. As mayor, I welcome all visitors to Lanett. If there is anything we can do for you, contact me.”

Post Commander Bledsoe said that he’s always glad to say good things about our veterans. He invited everyone to the Post 67 Veterans Day ceremony, which will be taking place at 11 a.m. EST this Thursday at Veterans Park in Valley. “We have gone through a difficult year for our Post and our country,” he said. “Because of COVID, we haven’t had any monthly meetings. We all miss those meetings, but I’m especially proud of the fact that we have kept up our membership in the Post.”

In addition to the upcoming Veterans Day program, the Post also hosted a Memorial Day program in May.

In the 1950s, Bledsoe served for five-and-a-half years in the U.S. Marines. He said that most of the officers he served under were decorated veterans of World War II and the Korean War. He said that he had an immeasurable amount of respect for them and what they had gone through. “They were serious, steadfast and disciplined in everything they did,” he said. “I don’t think they’d like some of the things that are going on in our country today.”

He greeted the Marines present with something they understand: “Semper fi.”

The expression is a way of life for current and former Marines; it’s Latin for “always faithful” and embodies the Marine Corps’ forever commitment to their fellow Marines and the U.S.

The principal speaker for the day was Rev. Bernie Deffinger, a former minister for the church. He was introduced by long-time friend Horace Welch who joked that “I don’t know much about this guy, and for all I know, he may have spent some time in the brig when he was in the military.”

Members of the church knew he was pulling their leg with both of those statements.

Deffinger got a good laugh out of it and added in good humor, “We had some really good speakers, people like military officers and pilots when these programs were done when I was here. For you to ask me to come back, no one else must have wanted to do it.”

Kidding aside, Deffinger then followed with a perfect message. He served in the military in the 1970s but mostly wanted to talk about his dad, a World War II veteran who passed away several years ago. The dad underwent jungle training in Panama as a member of the 158th Regiment, nicknamed the Bushmasters. The Bushmaster is a deadly snake in Central and South America.

“When I was growing up, men like my dad were considered heroes,” Deffinger said. “I’ve always considered him a hero and even more so after he accepted Christ five days before he died at age 82.”

Deffinger said he was also proud that General Douglas MacArthur called on the 158th for essential missions.

Deffinger said he had always admired MacArthur and quoted from the final speech he delivered at the U.S. Military Academy in West Point, New York, in May 1962. He was 82 years old at the time.

The West Point address was one of two famous speeches delivered by MacArthur following his military career. The first one was in 1951 and delivered in a joint session of Congress. It’s best remembered for the “old soldier never die; they just fade away” line. The 1962 speech at the Academy is remembered for MacArthur’s comments on duty, honor, country.

“Those three hallowed words reverently dictate what you ought to be, what you can be, what you will be,” he said to the assembled cadets. “They are your rallying points: to build courage when courage seems to fail; to regain faith when there seems to be little cause for faith; to create hope when hope becomes forlorn.”

Deffinger said he has much admiration for noted theologian James Dobson, but one quote attributed to Dobson concerns him. “He said that each passing generation is only half as Christian as was the preceding one,” he said. “That does not have to be. The church of Jesus Christ does not need to be backpedaling but moving forward in doing God’s work.”

As a veteran of military service, Deffinger said he believes the U.S. must always have a good national defense and strong offensive capabilities. “War is a horrible thing,” he said, “and no one knows that like the common foot soldier who has experienced it. It’s that common foot soldier who is called on to defend our country. That’s what makes him one of our noblest men. For all of those who have served on a battlefield or in a war zone, thank you for your service. Thanks also for those who served in other ways. God bless all of you who served.”