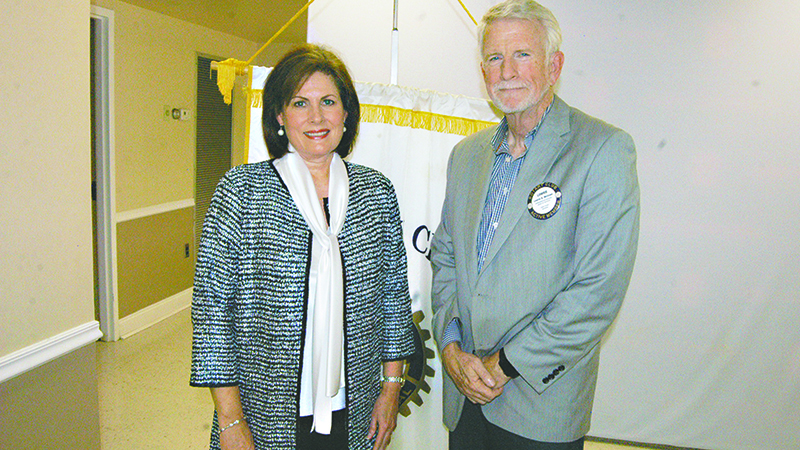 LANETT — Springwood School began an international program several years ago. A former pre-school building on the Springwood campus facing Cherry Drive was converted into International House in 2018, and nine international students were housed there that first year. Enrollment in the program has tripled since then and is on pace for further growth.

The program’s director, Ann Hixon, talked about this success at Thursday’s noon-hour meeting of the West Point Rotary Club, held in the Jane Farrar Event Center in downtown Lanett.

“We have a very diverse group of students,” said Head of School Lowrie McCown in introducing Hixon. “Our international program is one place where you can get to know people from all over the world. People often ask us how we get students from all over the world to come to live in Lanett, Alabama while preparing for college. We can tell you that these kids are loving the experience.”

When one thinks of the fall at almost any high school, one thinks of football season and how fun homecoming week is. The football team had students from England, Germany, South Korea, Spain and Vietnam. The homecoming court had two girls from foreign countries, and many international students loved the homecoming dance.

In a PowerPoint presentation, Hixon showed a variety of activities the international students were involved in. Some recently went to Callaway Gardens to help take down the fall decorations and replace them with Christmas decorations many will see at Fantasy in Lights. Some recently took a trip to Atlanta to visit Emory University, a school well-known for its liberal arts programs, business school and pre-med program.

In December, they will take in the Fantasy in Lights tour to experience the reward of having had a hand in something exceptional.

Hixon has noticed one big difference between the local students and those from outside the U.S. For the most part, local students seek admission to schools in the Southeastern U.S.

“The international students apply to schools all over,” she said, “schools like Texas A&M, Illinois-Chicago, Penn State, Utah and Cal-Irvine.”

The main goal is to earn that four-year college degree in the United States, and being at Springwood is a good start to doing that.

The parents of international students like that Springwood is close to major universities like Auburn and Georgia Tech. “Once a month or so, we will take them to Atlanta so they can experience being in a major U.S. city,” Hixon said.

International House is a 32-bed facility with the girls housed up front and the boys in the back. There’s a commons area in the middle of the building where everyone socializes and plays games like ping pong. Local students visit them there, and they often go shopping together. Proficiency in English is a must.

Three years ago, the Springwood international program had nine students from China. There were none this year because of COVID.

“One boy from China was enrolled here for four years,” Hixon said. “He went home for a visit and was not allowed to return, and he was able to finish his education online and graduated last year.”

The international program is certified by Homeland Security.

Hixon said she enjoys watching the international students blossom as their self-confidence improves.

“They have to speak English well before they come here,” she said, “but some are shy and not confident about speaking English. They do gain in confidence as they go.”

A member of the club asked Hixon if any of the students had ever experience homesickness. She said that they are so busy with their classes and building friendships with fellow students that they aren’t set back by that very much.

“In lots of ways, we have to function as their parents,” she said. “Some of the parents have even told us they want us to treat their children like they were our own when they are here.”

The fact that Kia is located just a few miles away from the Springwood campus is a significant rallying factor for Korean families looking for their children to go to the U.S. to study.

McCown said that having international students take classes with the local students is a good experience for them.

“Just to do business today, you have to work with people from all over the world,” he said.

He commended Hixon for having done an exceptional job with the international program.