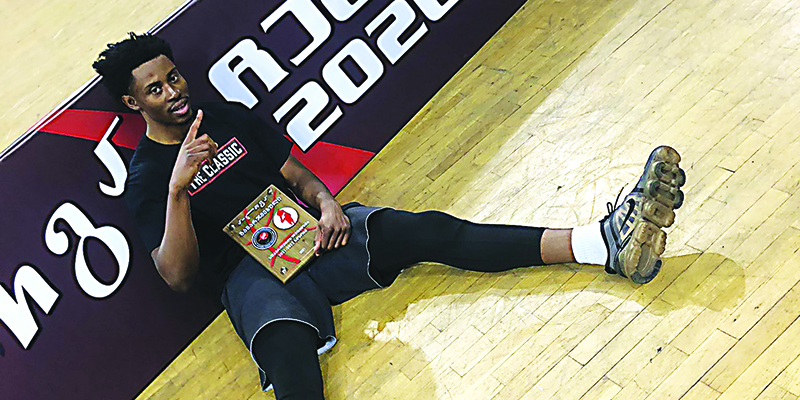 2021 in photos: Above, Former LaFayette standout Trevond Barnes poses after winning the A-League Finals in the Republic of Georgia. File photo.

EDITOR’S NOTE: This is the first in a two-part series looking back at the year 2021.

One day after playing Troup in its third game of the season, the Lanett boys basketball team was forced to put its season on hold, as a positive COVID-19 test sent the Panthers into quarantine for two weeks.

Chambers County School District decided that Jan. 6-8 would be pandemic days. This decision canceled all extracurricular activities in the school district, including sports, until Monday, Jan. 11.

Kristian Story is running out of fingers to put his championship rings on.

Story is a freshman on the Alabama Crimson Tide, who defeated Ohio State 52-24 in the College Football Playoff national championship game 52-24.

The three Lanett players played on the Dream team, which defeated the Stars 24-21.

With the chance Aaron would break the record, Randy Cox, who was the Valley Times-News sports editor at the time, decided he would get a credential with the hope to capture the record-breaking home run. “I was the only sports editor from Alabama to personally cover the home run. A lot of the other papers had stories but they didn’t actually send someone,” Cox said. “You didn’t know if he was going to hit the 715th, I was just lucky enough to be there that night. I got to walk up to him, shake his hand and tell him congratulations, and he said ‘thank you.’ He was just a really nice guy. Everyone was just really thrilled.”

Whether it was as a coach, teacher or just as a smiling face in the community, Mike Power touched everyone that he met. As a coach, he tried to lead his team to success, while making sure they learned and understood life lessons. In the classroom, he tried to go the extra mile for his students. To everyone else, Power was an example of how to put faith in God and to do the right thing.

Power died suddenly at the age of 47.

Coming into the season, the goal for the Beulah girls basketball team was to finally win its first area title and host a sub-regional game. The Bobcats had been close the past two years, but on Thursday, they broke through, defeating Reeltown 48-32 in the 3A Area 7 championship game.

For the first time in five years, the Lanett girls basketball team is heading to a regional championship. The Panthers fought for 32 minutes against No. 6 Geneva County, grabbing the lead for the first time in the fourth quarter and holding on for a 54-46 win.

After failing to advance to the regional round of the AHSAA tournament for 15 years, the LaFayette girls basketball team has advanced to a regional tournament for the second consecutive year, defeating Vincent 52-31.

Springwood School announced the hire of Kurt Page to be the school’s new football coach and athletic director. On Monday, the Springwood community had a chance to listen to Page and his ideas for the future of Springwood athletics.

Valley High School formed its first all-girl soccer team three years ago. After a winless inaugural season and a season cut short because of the start of the COVID-19 pandemic, the Rams picked up the program’s first win in a 7-4 victory over Russell County.

Lanett athletics get back to weight training in new facility

When the Lanett field house burned down on Feb. 1, athletic director and head football coach Clifford Story needed to quickly find a place that his athletic teams could work out and use.

After checking out about five or six locations, Story settled on Valley Baptist Church’s facility on Feb. 23.

Coming into the season, head coach Trentavious “Tay” McCants had high expectations for his team. Though it was his first year as Lanett’s head coach, McCants had his eyes set on Birmingham and the Panthers’ second straight championship appearance.

Lanett reached the championship game and narrowly lost. Because of the team’s dominant season, McCants was named the Greater Valley Area Boys’ Basketball Coach of the Year.

The Springwood baseball team clinched its playoff berth for the third consecutive, but unlike in years past, the Wildcats had to earn its playoff spot because of the AISA’s reclassification this past school year.

A little more than a year ago, Trevond Barnes didn’t know if he was going to play basketball again. Now, the former LaFayette standout is a champion, as Mega won the Republic of Georgia A-League Finals.

Leading by one in the bottom of the seventh, the Beulah softball team had a chance to go somewhere it had never been before— the AHSAA State Softball Tournament. Bobcats junior pitcher Katie Morris finished the inning in 14 pitches, striking out the side.

As the final out was recorded, the Bobcats rushed the mound in celebration— they were moving on to Oxford with a 1-0 win against Piedmont.