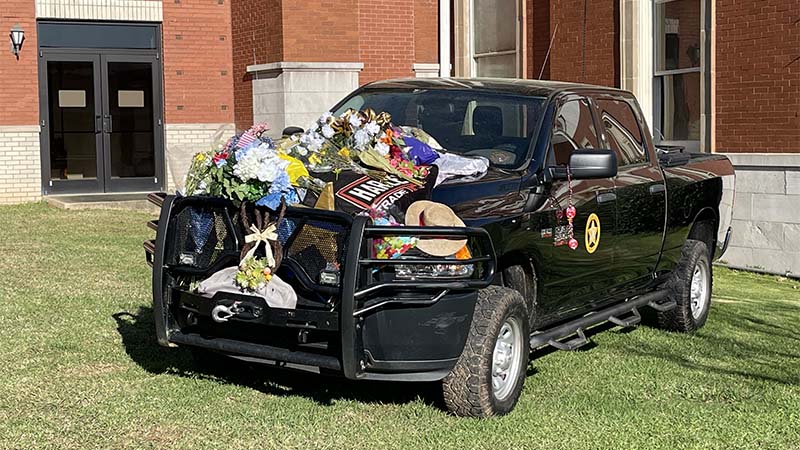 2021 in photos: Above, the vehicle driven by Capt. Jason Fuller with the Chambers County Sheriff’s Office is positioned outside the Courthouse as a memorial to Fuller, who died in March. File photo.

EDITOR’S NOTE: This is the second in a five-part series looking back at the year 2021.

At Lanett’s first city council meeting following Mayor Kyle McCoy’s Feb. 16 arrest on ethics charges, the council and mayor discussed what it might mean for the city moving forward.

Guthrie’s, the chicken-finger-only restaurant, announced that construction and build-out will begin on its newest restaurant in Lanett.

The H. Grady Bradshaw Chambers County Library is now offering Chromebooks and hotspot for checkout in order to help residents who do not have broadband access or a computer at home.

There are 25 Chromebooks and 20 hotspots available for seven day, at-home check with an adult library card that is in good standing from the Bradshaw Library in Valley or the LaFayette Library.

On March 8, at approximately 8:30 P.M., officers with the Valley Police Department responded to a call of multiple shots fired in the area of River Road and Gaylor Street. When officers arrived, they found two deceased males, both of which appeared to have been shot.

Tony Chandler, Lanett Director of Planning and Development, was arrested Friday morning for an ethics violation and other related charges, according to a press release from Attorney General Steve Marshall.

Chandler is charged with use of his official position for personal gain, third-degree theft of services and making a false statement to an employee of the Ethics Commission. Chandler was released on a bond of $12,500.

Cynthia Ann Adamson, 39, of Lanett, was charged with false reporting of an incident, a class C felony, according to a press release from the Valley Police Department.

She was transported to the Chambers County Detention Facility pending a bond hearing.

The Lanett City Council on Monday unanimously approved a resolution backing the Chambers County Commission’s application for funding through the CARES Act. The $2.2 trillion Coronavirus Aid, Relief and Economic Security (CARES) Act was approved by Congress in 2020 and signed into law by former President Donald Trump. It has been followed up by 2021 by a $1.9 trillion economic assistance program signed into law by President Joe Biden.

On March 06, 2021, Chambers County Deputies responded to Interstate 85 in reference to someone shooting into an occupied vehicle.

On arrival, Deputies located a Silver Dodge Charger parked along the side of the road that appeared to have bullet hole damage. The driver of the vehicle, who appeared to be suffering from a gunshot wound, was transported to the hospital by emergency personnel.

Thaddeus Holstic was arrested for two counts of attempted murder and one count of shooting into a occupied vehicle, related to this incident along Interstate 85.

Lanett Mayor Kyle McCoy waived his arraignment and plead not guilty for all three felony charges of using his official position or office for personal gain.

The Georgia Department of Transportation announced new projects in West Point earlier this week, including installing roundabouts for safer travel from Georgia 18 onto and off of Interstate 85. In all, the roadwork projects will cost approximately $15.9 million.

On Monday, April 5, officers of the Valley Police Department were called to the King Ford Auto Dealership located on Fob James Drive in reference to a burglary and theft.

In late February, the East Alabama Fire Department began the first firefighter rookie school in Chambers County, a milestone that Fire Chief Kerry Pickard says he is extremely proud of. “We’re excited,” Pickard said. “These guys have worked hard to get this place built up. It’s come a long way.”

The training center is located on the old Fairfax Mill site, adjacent to Fire Station No. 3.

The LaFayette Fire Department, along with several other agencies, responded to the blaze at the lumber company, located at  910 9th Ave Sw, around 5:40 p.m. Thursday evening.

On Saturday, May 1, friendly faces from various places gathered for Chattahoochee Riverkeeper’s Valley River Rally. The sold-out event, which registered 100 paddlers, began at Hardley Creek Park in Lanett, Alabama and ended at the City of West Point Downtown River Park.

Greater Valley Area Chamber of Commerce Executive Director Carrie Royster was in attendance at the May 3 Chambers County Commisision meeting to talk about the new anti-litter campaign in Chambers County.

There will be signs popping up along roadways throughout the county that say either, ‘Be part of the solution not the pollution,’ or ‘Bin it to win it.’

The Fairfax Junior Variety Club, the Junior League of the Chattahoochee Valley and the City of Valley teamed up in a cooperative effort to make Valley City Park a destination for family outings.

The city has put in some concrete pads for new playground equipment and has built new sidewalks in the park. The local chapter of the Junior League has 501(c)3 status and has applied for numerous grants related to the upgrade of City Park.

Some of the requests have been approved, and some new equipment has been purchased.

A bright yellow Volta spinner is proving very popular with children. It’s plenty big for several kids to be on it at once, and it gets going pretty fast when an adult pushes it for them.

Allen Rose, who was named LaFayette High School’s next principal on May 6, tendered his resignation on Tuesday, May 11.

Since July 2020, the citizens of Beulah have been working to stop a potential quarry from being set up in the city. Lee County residents will had the chance to vote on a zoning ordinance that would more than likely keep the quarry from being put in Beulah.

More than 50 northwest Chambers County residents gathered at the Union Hill Community Club seeking information from two county commissioners on whether efforts are underway to locate a rock quarry near their homes.