Antavious Woody and Caden Story set to take the field in Hattiesburg, Mississippi 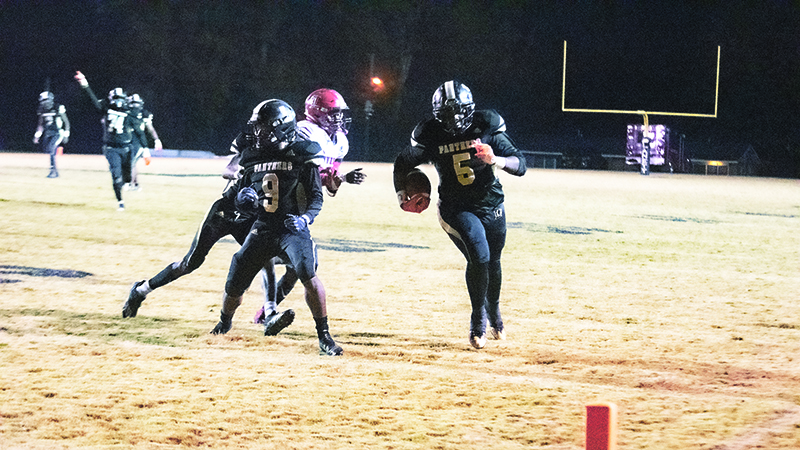 Barreling toward the goalline: Caden Story (right) rushes toward the end zone for a touchdown against Luverne.

The game will be played Saturday, Dec. 11, at Carlisle-Faulkner Field, M.M. Roberts Stadium on the campus of the University of Southern Mississippi. Kickoff is set for noon.

Alabama’s all-stars report to the AHSAA office Tuesday morning and check in at Camp Shelby, where both teams will be staying this week, at 2:30 p.m. Forty all-stars have been selected to represent Alabama. Alabama All-Star head coach is Adrian Abrams of Minor High School.

The game, an annual event of the Alabama High School Athletic Association’s coaching wing, the Alabama High School Athletic Directors & Coaches Association (AHSADCA) in conjunction with the Mississippi Association of Coaches (MAC), was first played in Mobile in 1988. Alabama’s All- Stars won 19-7 last December at Cramton Bowl and currently hold a 23-11 edge in the series heading into Saturday’s 35th game of the series.

Alabama’s squad will conduct its first practice Tuesday night from 7 to 9 p.m., at Hattiesburg High School. Mississippi will practice at the same at Oak Grove High School. Both teams will have two practices Wednesday at the same locations at 9 a.m., and 1:30 p.m. Thursday’s drills will be at the same time. Both teams will have one practice from 9 to 11 a.m., on Friday, and will work together in a community service project on Friday afternoon. A banquet will be held Friday night at Thad Cochran Center at USM, and the annual Fellowship of Christian Athletes breakfast will be at M.M. Roberts Stadium Saturday morning at 8:30, followed by a Player Meet & Greet inside the stadium from 10 to 11 a.m. Kickoff is set for noon.