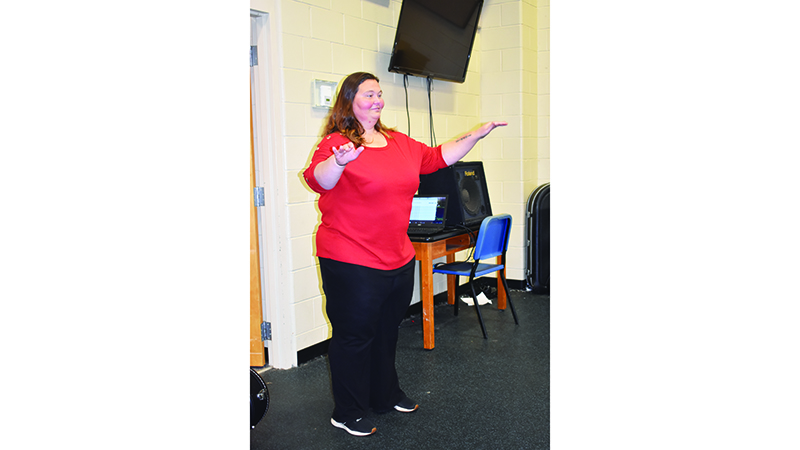 Strike up the band: WF Burns Middle School Teacher of the Year Kitty Deloach is shown demonstrating how she conducts a band.

Deloach was surprised by the announcement at an assembly during Say No to Drugs Week. After some words from a guest speaker, Principal Andrew Leak said he had one more thing to do.

“And he presented Teacher of the Year, and it was me, and I busted out crying, and then my whole family walks out,” she said. “My husband tells me everything. He can’t buy me a Christmas present without giving it to me early because he can’t keep the secret. So, I was shocked.”

Deloach said in the past, teachers voted for the Teacher of the Year. This time, parents and students got to choose.

“And I think that that helped me out a lot just because I’ve taught so many students, and we’ve become very close because I teach them from sixth grade to hopefully twelfth grade,” she said.

Deloach jokingly said that if there’s anything her students know her for, it’s being the corny teacher who thinks she’s funny.

Deloach said she aims to be personable with her students. She joked that her students laugh at her, which is the same thing as them laughing with her since she laughs at herself.

“I think I’m down to earth and try to relate with the kids by getting on their level, telling them jokes, trying to make them smile enjoy themselves while they’re learning,” she said.

Deloach has been teaching in Chambers County for about 17 years.

“I actually worked here for four years, and then I thought I wanted to move back home,” she said. “And I moved back home and taught elementary music in Montgomery for a year. And then, the person that took my spot for a year ended up not coming back, so I reapplied and came back. So, I’ve been teaching for 18 years, but 17 here, off and on.”

Deloach’s interest in teaching music began when she was in a school band, which allowed her to travel.

“I never would have gone to Disney World had it not been for band,” she said. “And then I said, ‘I might try this music thing.’ You know, I went to Auburn … So I got to go to California, and then I made another band, and I got to go to all these different places.”

Until COVID-19 hit, Deloach’s students went on a trip every two years.

“I take them to different honor bands, so they can visit college campuses because I think that’s important,” she said. “We also have had students go to New York and play in the Macy’s Thanksgiving Day Parade, and I’m going to have a few students travel again this year to hopefully go play next year. So, we try to get them involved as much as possible.”

Deloach said the most rewarding thing about her job is showing a student with low confidence that they can succeed.

“That’s the most rewarding thing is to see a kid who can’t get a sound out,” she said. “By the end of that first year, they are playing songs and are proud of themselves.”

Deloach teaches her students both about music and life. She loves it when she’s able to be a good influence on a student who puts in low effort. She said students sometimes come back to her and say they were thankful for her influence.

Deloach has a bachelor’s degree and master’s degree, both in music education, from Auburn University.