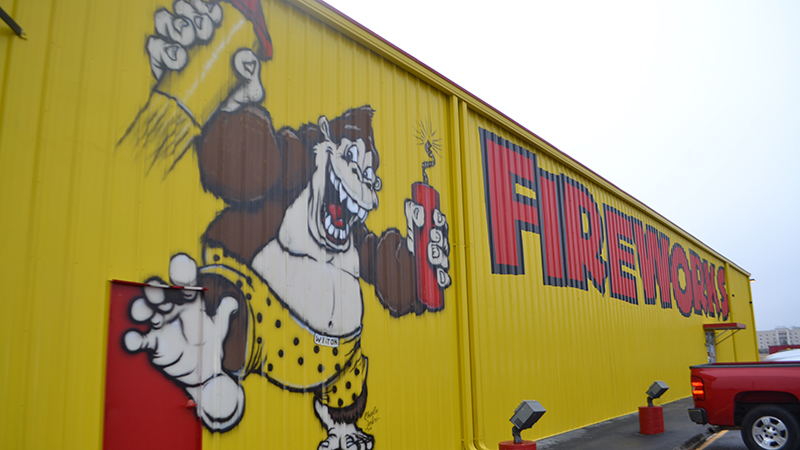 Boom city: There are two peak periods of the year for Boom City USA, located off I-85 at Exit 77. They are the weeks leading up to the July 4th and New Year’s holidays. The big warehouse has been busy this week as people from the two-state area have been going there to purchase fireworks. It takes a staff of between 25 and 30 people to handle the crowds that go there this time of year. File photo.

LANETT — Business is very good these days at Boom City USA, and Friday will likely be the busiest day of the year. New Year’s Eve and July 4 are always the two busiest days of the year at the fireworks warehouse located off I-95 at Exit 77.

“Things have been going pretty well for us,” Store Manager Marsha Pickens told The Valley Times-News. “We will have a great crew of local kids helping us on New Year’s Eve. We plan on having between 25 and 30 of them here at the store. Many of them helped us on July 4th.”

Boom City has a huge assortment of firecrackers, missiles, rockets, Roman candles, spinners, sparklers and many other items.

“We have plenty of best-sellers like Growler, True Art and Tank Girl,” Pickens said. “People like our wedding sparklers and gender-neutral items.”

Boom City usually follows a pattern. They will sell wall to wall by July 4. It will take them several months to restock the big warehouse, and they will sell out again on New Year’s Eve.

Boom City gets lots of business this time of year from the Troup and Chambers counties. “We also get lots of people from Opelika, Auburn and Phenix City on the Alabama side and people from Newnan and Atlanta on the Georgia side,” Pickens said. “A lot of people traveling on I-85 stop here to pick up some fireworks. There’s no telling where they could be from.”

Pickens is well pleased with young people from the local area who work at the store this time of year. “We simply couldn’t do what we do without them,” she said. “They are good kids, and we are glad to have them.”

Some of the crew man the cash registers in the check-out line. Others escort customers out the side door once they have made their purchases. Some work the parking lot, helping people find a parking space and seeing they get out onto Phillips Road with no trouble when they are leaving.

One of the top sellers for the past 15 years has been a brand known as Loyal to None. As long as it’s popular, Boom City USA will be loyal to it and its snarling pirate logo. Other popular items include the Peacock, the Saturn Missile Battery, Country Boy, Distractions, Go Go Gorilla, One Bad Mother-in-Law, Evil Clown, Fighting Rooster, Tears for Fear, Migraine and Pain & Gain.

Gone but not forgotten is Boom City’s mascot, Wilton. A giant, blow-up gorilla that once sat on top of the building, Wilton has been retired. He’s more of an art object now. There’s paintings of him both on the front and on the south side of the building. The same image graces t-shirts worn by the staff. “It was an adventure having Wilton on top of the building,” Pickens said. “When a big gust of wind came by he’d often get blown top the top and sometimes across the road.”

Several years back, Wilton once made it across Phillips Road and landed in a field near the Huguley family cemetery. Another time, he was blown a good distance from the store and landed on a cell tower.

“We got him down, sewed him up and put him back on top of the building,” Pickens said.

Wilton was named for store owner Wilton Tugwell. “He’s a great guy and a good sport,” Pickens said. “He loved his namesake.”

Boom City USA is big in promoting safety. They encourage everyone using fireworks to always follow safety guidelines. Firefighter Mike is their spokesman and has a long list of safety rules he wants everyone to follow. They are listed at www.boomcityusa.com.