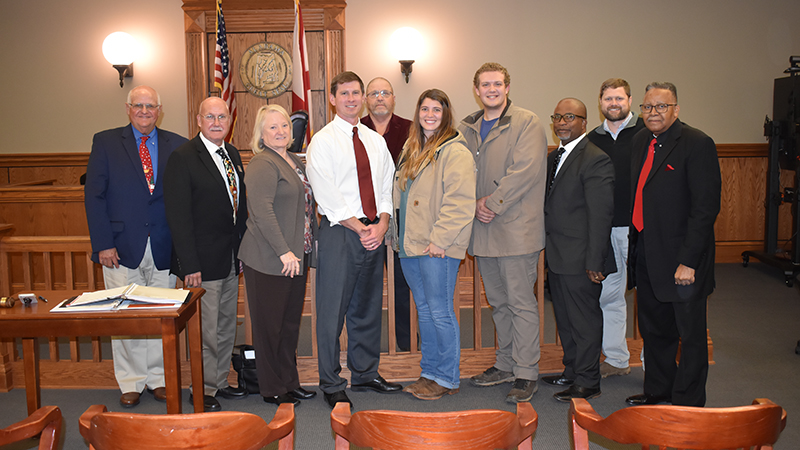 At the Chambers County Commission meeting on Monday, County Engineer Josh Harvill introduced two interns — Michael Pigg and Maddie Johnson — who have been working with the county under the direction of Harvill and Assistant County Engineer Daniel Lundy. Lundy is their direct supervisor. Pigg was salutatorian at Valley High School, and Johnson was Miss Springwood High School. Pigg said he wants to work on environmental impact assessment, while Johnson said she wants to be a civil engineer.

“Maddie and Michael commute back and forth from home to work … gas is $3 a gallon,” Harvill said. “We don’t pay them much. I promise ya’ll that we don’t pay near what we get out of them.”

Harvill said that the work done by interns like Pigg and Johnson over the past few years has brought the county over $1 million in federal funds.

“Just let me say congratulations on your accomplishments,” said Commission Chairman Debra Riley. “[They seem] to be quite numerous, and we do hope you find employment in Chambers County. We’d very much like to keep talented young people like you here at home.”

In other business at the meeting, Captain Robert Chambers of the Chambers County Drug Task Force asked the commission to approve the purchase of a new vehicle, which they did.

“The total estimate of the improvements is $340,908.75,” County Engineer Josh Harvill said. “The cost-share on the safety grants is nine to 10 — nine percent Federal Highway Safety Improvement funds and 10 percent local, so the total local cost is $34,090.87.”

The council approved a resolution to execute an agreement with East Alabama Occupational Medicine as the program manager of the Chambers County Highway Department’s Substance Abuse Testing and Reporting.

Harvill said the agreement would cover the county’s annual fee as well as individual testing for new hires and random quarterly drug screens.

Harvill handed out a flyer announcing that there will be a public involvement meeting on Jan. 6 at 4 p.m. CST in the Crowder room of the Valley Sportsplex. The meeting is to discuss widening, resurfacing and traffic signalization at the intersection of CR-208 (Phillips Road) and CR-299 (Cusseta Road). The public is invited to come review plans, ask questions and discuss the project with representatives from the Chambers County Highway Department staff.