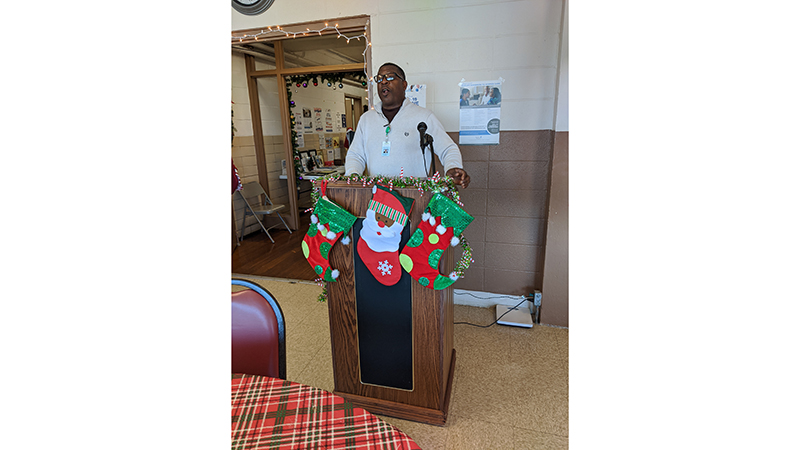 Grief, by definition, is painful, and the social expectations surrounding it can make it even more difficult to deal with. This time of year can put grieving people in an awkward situation as friends and family members gather around them for the holidays. On Tuesday, Chattahoochee Hospice chaplain and bereavement coordinator Michael Stiggers told members of the Lanett Senior Center that it’s OK to feel however they feel at any time of year.

“There’s not a person on this Earth that does not grieve,” Stiggers said. “Everyone grieves. We all grieve differently.”

“One of my momma’s [major] losses — she lost her ability to drive,” he said.

Stiggers said his father also couldn’t drive but would sometimes ask if he could.

“Now, there’s one thing I need to tell you all today that’s some good news,” he said. “We learn how to live with our grief.”

Stiggers gave the example of him and his wife having to adapt to living with a child in their house.

Stiggers explained that after having a child, he and his wife had to either bring the child and their things with them or leave the child with someone they could trust.

“Then, we had to learn how to live without children,” he said. “We are empty nesters.”

Stiggers said that his sister was killed by a drunk driver and his family had to learn to live with her absence. Sometimes they’d feel sad about it, and sometimes they’d remember the joyful times they had with her.

Stiggers said that within the past two years, it’s become common for people to ask if someone died of COVID-19, as if that’s a more painful loss than other causes of death. Additionally, he said that some types of deaths, such as death from suicide or death from AIDS in the 80s are more stigmatized. No matter what the cause of death, he said, people need to grieve.

Stiggers said that all sorts of emotions, including guilt, shame, blame and anger are commonly experienced in grief.

“Jesus experienced that,” he said. “Ya’ll remember? When Lazarus died, Mary and Martha blamed Jesus. They said, ‘If you had been here, my brother would not have died.’”

Stiggers told the audience not to be hard on themselves or others when they were grieving.

He finished his speech by going over a bill of rights for mourners. The list included the right to experience grief in one’s own unique way, to feel however one feels, to be treated as a capable person, to say no (or yes), to have privacy, to ask for help, to be listened to, to be treated with respect, to cry or not cry, to express one’s feelings, to talk about one’s grief, to be alone and to be given time to heal.