Christmas on the Square and parade a success in LaFayette 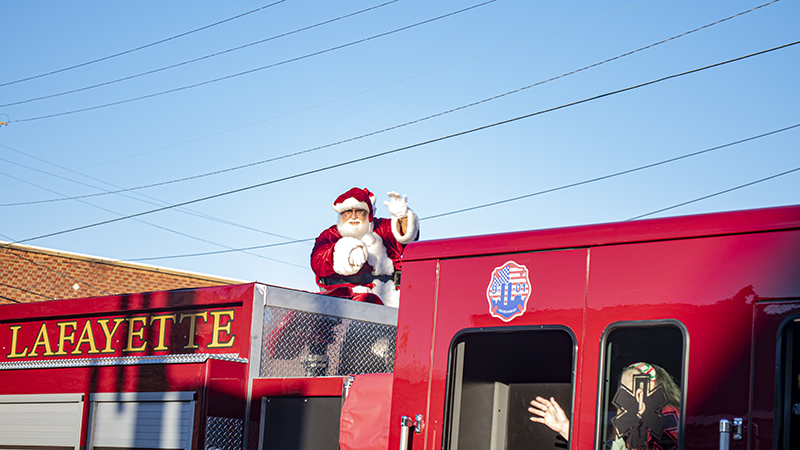 Here comes Santa: Santa Claus closed out the LaFayette Christmas parade Sunday atop a LaFayette Fire and EMS truck. The parade was the first for LaFayette in about 30 years. Photo by Ed Pugh.

Many would have found it difficult to find a parking spot in the area of the square in downtown LaFayette on Sunday around 3 p.m. CST. Both sides of LaFayette Street South were lined with people awaiting the Christmas parade, which the city hadn’t had in a long time. Adrian Holloway, who is on the LaFayette Christmas Committee, said she’d been told by fellow committee member Lynn Oliver that LaFayette hadn’t had a Christmas parade in about 30 years.

“It’s hard to believe that it’s been 30 years since we’ve had a Christmas parade in our city, but we won’t go another 30 years without one,” Holloway said. “This will be an annual event.”

“We were really pleased with the turnout despite having to reschedule it due to weather,” she said.

The parade started near the LaFayette High School football stadium and made its way downtown. The first signs that the parade was nearby were honks and sirens from emergency vehicles. Approximately 40 vehicles and floats passed by, many of their drivers and riders waving at the crowds. Some tossed free candy into the street. Many attendees could hear the LaFayette Marching Bulldogs before they could see them. The marching band paused in the street to give onlookers an up-close performance.

The Grinch was present to greet people along the street, as was Santa on top of a fire truck at the very end of the parade.

After the parade, some of the onlookers visited vendors who had set up shop on Alabama Avenue E. One vendor, Roman’s Bear Club, was similar to Build-A-Bear Workshop and had a costumed mascot to greet visitors. A long line formed in front of a food truck labeled Kaj’s Steakburgers.

Attendee Gregory Sutton said his favorite part of the parade was the firetruck. He also said he liked the marching band, especially since his daughter, Camille Sutton, was in it.

“My favorite float would have to be BeeTV,” attendee Gretil Sutton said. “It looked really good. It was awesome.”

Gretil said she looked forward to going home and watching Christmas movies with her family.

Holloway said she’d only received positive feedback from people who had attended the event.

“We’re a small city, but we’re full of love,” Holloway said. “And I kind of went on Facebook last night, after it was all said and done, and all I saw was positive feedback and people talking about the love that they felt being at the event, being able to engage with one another. And so, overall, it was just awesome from the parade, from the entries in the parade to the vendors, everyone enjoying the food.”

Holloway said that before the Christmas tree lighting, LaFayette Mayor Kenneth Vines shared warm wishes for the city and discussed his plans for its future.

“The city was full of love,” Holloway said. “And that’s probably the most rewarding thing, is to look back and see all of the comments. And I was looking, and just thinking they’re from a diverse group of people. It’s not one group of people that enjoyed it. Everybody in the city that participated, that was able to be there, said that they enjoyed it a lot.”