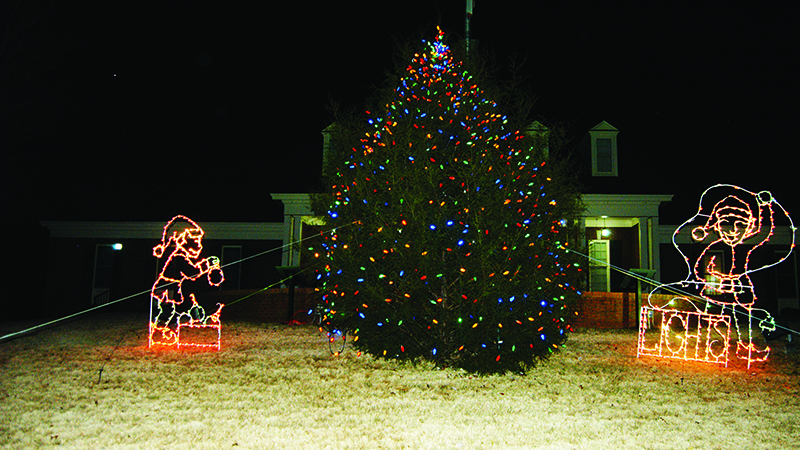 Christmas lights: The City of Valley held a tree lighting ceremony Monday to kick off the 2021 holiday season.

VALLEY — The Christmas lights came on in a big way in Valley Monday night. Moments after Valley City Council’s Monday meeting, the big tree in front of city hall was lit up for the first time this year. Also being lit were the Christmas merry-go-round, the Madonna, the Langdale Nativity, the Iron Bridge and the Highway 29 street light decorations from one end of the city to the other.

As the lights went on just past 6:30 p.m., council members and members of the city hall staff did some caroling in front of city hall. Robin Butts and Paul Story led them in “Go Tell It on a Mountain,” “Joy to the World” and “We Wish You a Merry Christmas.”

Mayor Leonard Riley thanked everyone who attended for their help in the city’s good year.

“It’s what happens when everyone works together,” he said. “The city is in the best financial condition it has ever been in, and we were able to give the biggest raises we have ever given this year.”

In Monday’s meeting, the council finalized the sale of 15 acres of land to LHD properties, LLC. The land is located on 55th Street near the junction of Fob James Drive. The site will be the future homes of two existing local businesses, Brumfield Electrical & Communications (BEC) and Riggers, Fabricators and Millwrights, Inc. (RFM). BEC is currently located in Cusseta and RFM in Huguley.

The council also agreed to purchase new playground equipment for the city park. It will cost $7,000 and will be funded by an Appalachian Regional Commission (ARC) grant. This is the second phase of making a significant upgrade at the playground at city park. The Fairfax Junior Variety Club has played a key role in the project.

Council Member Jim Clark thanked the Rev. Tim and Bonnie Campbell and the members of the Shawmut Church of the Nazarene on the good work they are doing for the community.

“They recently painted the field house on Shawmut Circle and have done great work in picking up litter throughout the neighborhood,” he said.

Council Member Kendall Andrews said he was glad to see a new pavilion and picnic area going in at the River View boat landing. “It looks really good,” he said. “Toby Sides did a good job there.”

In other action, the council declared a Valley Parks & Recreation vehicle a surplus item that can be sold to a high bidder. It’s a 1998 Ford F-150 truck.

Valley Parks & Recreation Director Laurie Blount that a big turnout was on hand for the Sunday afternoon opening of the Christmas merry-go-round.

“We want everyone to come and ride it,” she said. “This year marks 65 years of having a Christmas merry-go-round. Dec. 24 will get here before you know it.”