Community bands together to provide toys for storm victims 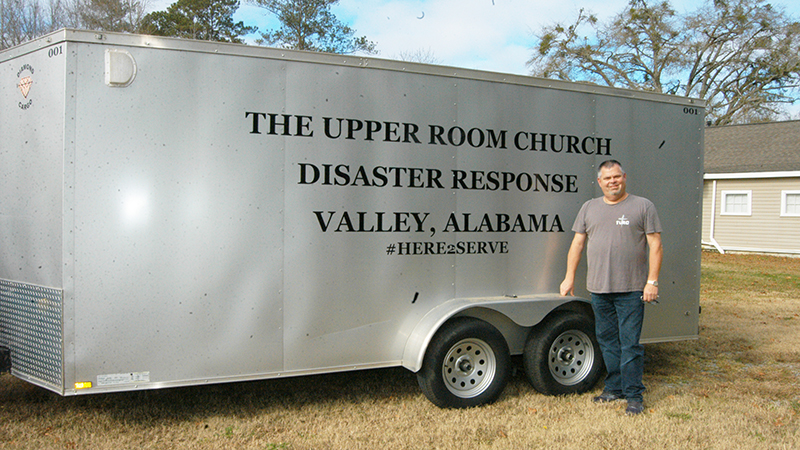 Loaded up: On Wednesday and Thursday of this week, the trailer was set up across Highway 29 from Walmart to accept donations for victims of the tornadoes that ravaged Kentucky. Bogey Cotney, pastor of the Upper Room Church in Valley, stands next to a trailer full of toys donated by the Chambers County community. Photo by Wayne Clark.

VALLEY — It took just two days for the people of the Valley and surrounding areas to fill a seven-foot-wide by 14-foot-long trailer with Christmas toys bound for storm-ravaged western Kentucky. The toys are an effort to provide some Christmas joy to children whose suffering has been unimaginable in recent days.

On Wednesday and Thursday of this week, the Upper Room Church Disaster Response trailer was filled to capacity with toys. People either brought them to the trailer or donated money.

“The people of the Valley really came through,” said Pastor Bogey Cotney. “We didn’t know how it would go this close to Christmas, but it took only two days to fill the trailer.”

On Wednesday and Thursday, the trailer was set up in the Village Square Shopping Center parking lot next to the Valley office of South State Bank.

“I want to say thank you to everyone who donated,” Cotney said. “They had their own Christmas to think about but stepped forward to help those in need.”

On the night of Friday, Dec. 10, at least five tornadoes touched down in western Kentucky, causing massive damage and killing at least 75 people. At least 16 people are still missing. The dead ranged in age from two months to 98 years. At least a dozen children were killed, and approximately 140 people were taken for treatment in emergency rooms that night.

Cotney and Johnny May will be driving the disaster relief trailer to Paducah, Kentucky, where they will leave the toys with the local police department. The toys will then be distributed to children in the hard-hit areas.

“From Paducah, we will be going to Mayfield to see if there’s anything we can do to help,” Cotney said.

The wife of Kentucky Gov. Andy Beshear will be supervising the distribution of aid in the

“She will know where the toys need to go,” Cotney said.

Upper Room Church has had the trailer for several years now. Members of the church drove the trailer to Beauregard when that nearby community was recovering from a devastating tornado in March 2019. They have also made trips to Louisiana to help with hurricane relief and gone to numerous places in Alabama after communities sustained some storm damage.

“We usually take five people when we go to a disaster zone,” Cotney said. “We can do everything from taking trees off of houses, removing storm debris and putting temporary tarps over storm-damaged roofs.”

Cotney said that Valley Walmart and the City of Valley were very helpful in this week’s toy drive.

“They were great,” he said. “So many people were generous. The people of the Valley and the surrounding area are so giving. Those of us at the Upper Room Church have chosen to be the hands and feet of Jesus Christ, our Lord and savior. Disaster relief efforts allow us to get that message across. We thank everyone for helping us with this mission.”