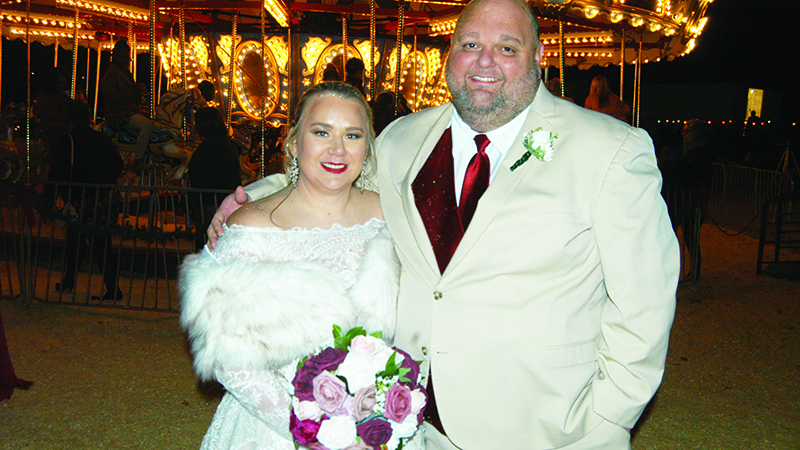 Fairy tale wedding: Leah and Joshua McDonald pose together in front of the merry-go-round, where the couple shared their wedding vows with friends and family.

VALLEY — For 65 years now, a Christmas merry-go-round has brought holiday joy to the people of the Valley. Over that span, many group gatherings have taken part in this continuing tradition. There have been lots of school groups, church groups and senior center groups making trips to the merry-go-round to enjoy each other’s company while taking in some fun rides on a carousel. There have also been a number of family and class reunions meeting there.

A first-time-ever event took place there this past Friday – a wedding.

In a 7 p.m. ceremony, a young couple from the Huguley community said their “I do’s” before a large crowd of friends and relatives.

Leah Edwards and Joshua McDonald had dated for the past three years, and Joshua popped the question this past summer. Leah said yes and started making plans for the special day.

“We first thought about going to Las Vegas to get married,” Leah said. “A lot of couples do that. The more I thought about it, though, the more I wanted to do it close to home where lots of our friends and relatives could be there.”

Somewhere along the line, a thought occurred to her about doing it during the Christmas season at the merry-go-round.

Leah was clever enough to incorporate winter themes into the occasion. The bridesmaids wore emerald green and burgundy dresses with white furs, and the groomsmen wore beige suits with red ties.

Instead of throwing rice at the newlyweds, they were showered with fake snow. The entrance chain was opened, and they walked through the merry-go-round’s wreath-like archway. As they walked toward the big red candle, two lines had formed, and the wedding guests gleefully tossed large flakes of glitter over them. It looked much like a massive snowfall.

Some large maple trees, still with most of their leaves, provided some stunning gold color just outside the fence.

The post-wedding reception was catered by B.J.’s Butt House, located on the FOP Road in Huguley. The wedding vows were just the start of the party. The attendees ate heartily and rode the ponies well into the night.

Leah’s dad, Eugene Edwards Jr., predicted that this wedding may have been the first at the merry-go-round but won’t be the last.

Mom Cecelia is married to Keith Cannon. Joshua is the son of Richard and Stacy McDonald.

Leah and Joshua are graduates of Valley High. Joshua earned his diploma in 2002 and Leah in 2006.

To help spread Christmas cheer to those who are less fortunate, the wedding guests brought toys to donate to charitable organizations.

On Saturday, the newlyweds did some tailgating at the Iron Bowl, which took place in nearby Auburn.