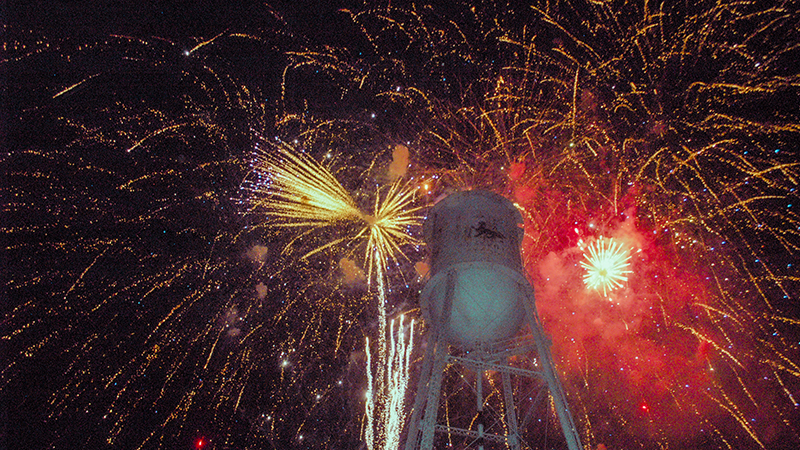 Ringing in the new year: Many will purchase and light their own fireworks to celebrate the new year. Photo by Wayne Clark.

With the new year approaching quickly, many are looking forward to the tradition of New Year’s Eve fireworks. While they can be a thrill and a spectacle, they can also come with legal and safety risks. Knowing the laws around fireworks as well as how to handle them properly can prevent a holiday from turning sour.

A deputy from the Chambers County Sheriff’s Office who didn’t wish to be named said that fireworks stands in Alabama are governed by the state fire marshal’s office. He said ordinary people can only buy Class C fireworks.

“You wouldn’t want it to go to Class B because that’s professional,” he said. “Class A is explosives, so you don’t go there, either. So anything that’s a Class C would be permissible as long as it’s sold through a licensed fireworks dealer.”

The deputy cautioned that just because fireworks can be sold to ordinary citizens doesn’t mean they’re safe and that they should be used carefully. In fact, Pilgreen said that within the span of 2019 to 2020, one person lost his left hand and another lost his life in Alabama from handling consumer-grade fireworks incorrectly. Both were under the influence of alcohol.

The deputy said that if someone constructs a new device out of Class C fireworks, and using it leads to injury, criminal charges could apply. Pilgreen added that people in Alabama can get in trouble just for constructing a “destructive device” out of fireworks.

The deputy said that the fireworks-related calls the Chambers County Sheriff’s Office most often gets around New Year’s Day are noise complaints about fireworks being shot late at night. He said sometimes the sheriff’s office receives calls about gunfire that turns out to be fireworks or vice versa.

“There’s not a law saying you can’t shoot [fireworks] past a certain hour,” he said. “If there’s a complaint, it’ll have to be addressed.”

The deputy said that city laws may differ from county laws and that the county can’t enforce city ordinances.

“Sparklers and things like that are okay,” Doody said.

Valley Police Chief Mike Reynolds said Valley has no ordinances regulating the use of fireworks.

“We just ask that they be considerate of their neighbors and to not shoot them off after 1 a.m. or so,” he said.

The Valley Times-News couldn’t reach a Lanett public official to inquire about fireworks ordinances. However, there is an online code of ordinances for Lanett from Apr. 16, 2018. Section 18-4 of the code states, “It shall be unlawful for any person to discharge, explode or ignite any fireworks within the city or its police jurisdiction, between the hours of 10 p.m. and 10 a.m.”

Smith said that the types of calls the TCSO gets most often pertaining to New Year’s fireworks are complaints that people are shooting them at the wrong time, which the TCSO would consider noise complaints.

“We would go out and try to make contact with the people that are shooting them and just make them aware that they have to shut them down after 1 a.m.,” he said.

Jorge Olmo Novoa of the West Point Police Department said that as far as he could tell from looking into local ordinances, West Point, like Troup County, follows state laws regulating the use of fireworks. He said information on Georgia fireworks laws can be found in Georgia Code 25-10-2.

“You can’t use them around hospitals or elderly care facilities, he said. “You can’t sell them to juveniles under the age of 18. It tells you the class of explosives that can be used and why. It’s pretty extensive.”

Pilgreen shared a few fireworks safety tips. He emphasized that they should be used as they were intended to be used and that all fireworks, even if they’re Class C, should be used with extreme caution.

“If you have a firework item that misfires, do not attempt to reuse it,” Pilgreen said. “It can lead to a disaster. Properly dispose of it. Get rid of it.”

Pilgreen also said to keep a fire extinguisher handy in case something catches on fire.