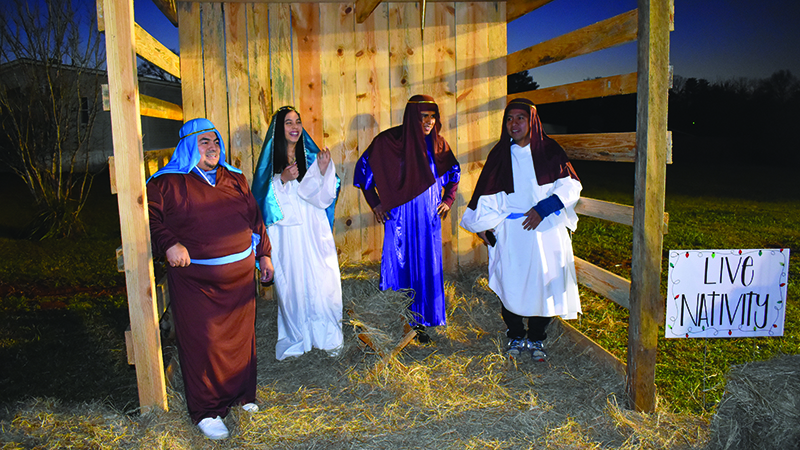 Even though it was cold enough to see one’s breath, the field across from The Bridge Church in Cusseta was alive with activity Sunday evening as visitors enjoyed Christmas in Beulah, a festival celebrating the holiday season.

The field was brightly lit, and there was music to set the mood. Visitors enjoyed activities for all ages such as hayrides under the clear night sky, decorating Christmas ornaments and roasting hot dogs over two bonfires. At the entrance to the field, guests could register for door prizes such as a pair of Oakley sunglasses and a decorative box with an American flag on it. Further into the field was a live nativity with four actors and a couple of animals, where the nativity story was read in English and Spanish. Guests also helped themselves to a hot cocoa bar, games, pony rides and inflatables. Santa was present for pictures; many people cheered when it was announced he had arrived.

“Tonight is really about just bringing the community together and celebrating Christmas and really giving people an opportunity to get out and do life again,” said Associate Pastor Andrew Bryan.

Bryan said he believed the event, which The Bridge Church was holding for the first time, would be held annually and said he looked forward to it. He said he appreciated everyone who showed up.

Shannon Carter, a visitor, said she looked forward to letting her four-year-old daughter, Savannah Carter, enjoy the festivities. Savannah said her favorite thing about Christmas was “a dog,” by which she may have meant she wanted one for Christmas. Her parents laughed.

Visitors Louellen Stoner, Anne Hamby, Richard Smith and Jackie Scott sat together at a table under a canopy tent. Stoner and Hamby said they looked forward to enjoying hot dogs and hot chocolate. Hamby also looked forward to the nativity scene. Smith said he wasn’t looking forward to anything in particular.

“I just came here to check everything out,” he said.

Scott said she looked forward to enjoying company and watching others have fun. She said she hoped some visitors would have their lives turned over to God.

On the hayride, which took about ten minutes, riders sang Christmas favorites such as “Jingle Bells” and “Frosty the Snowman.”