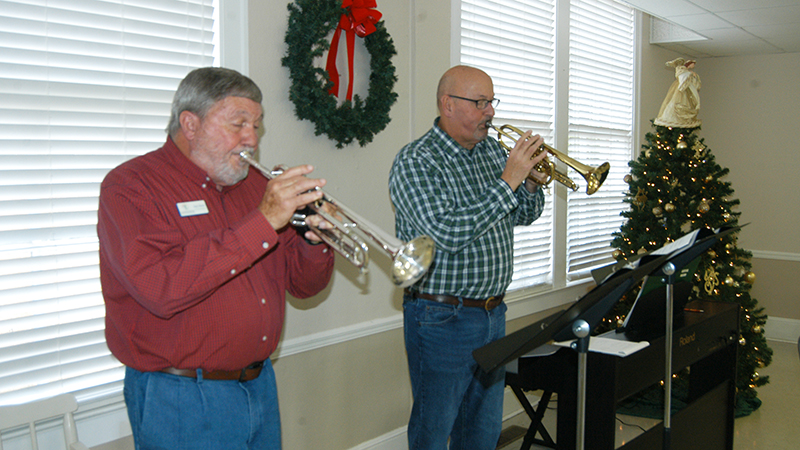 Belting out the tunes: Gary Harris (left) and Tommy Weldon (right) entertained members of the Kiwanis Club of Valley with some Christmas music during the noon hour on Wednesday. Harris played the trumpet and Weldon a cornet.

VALLEY — While the state of Alabama’s Iron Bowl rivalry between Alabama and Auburn is well known, there’s also rivalries between other four-year colleges in the state. There’s been a long-time rivalry between Jacksonville State and Troy State, especially between the bands representing each school, JSU’s Marching Southerners and Troy’s Sound of the South.

During the noon hour on Wednesday, two former members of those bands put aside the rivalry to perform some classic Christmas music for members of the Kiwanis Club of Valley. Gary Harris, the music director for the Langdale Methodist Church, attended Jacksonville State from 1966-69 and remains gifted in playing the trumpet. Tommy Weldon was part of Troy’s Sound of the South in the early 1980s. He’s still good on the cornet.

“Dr. Johnny Long was my band director at Troy,” Weldon said. “He was a graduate of Jacksonville State. I learned a lot from him, not just music but also about being a good citizen and a leader. A leader, he would tell us, doesn’t have to be told to pick up a piece of litter they see laying on a sidewalk. They pick it up and dispose of it the right way. I think of Dr. Long every time I see litter on a sidewalk.”

At 7 p.m. on Tuesday, Dec. 14, Harris and several other local musicians will be playing in a free concert at the First Baptist Church of LaGrange.

In Wednesday’s version of dueling horns, Harris was on the trumpet and Weldon on the cornet.

Appropriately enough, they began with an impromptu version of the “Feudin’ Banjos” tune from the 1972 movie “Deliverance.”

Though they hadn’t put in that music practice time, Weldon and Harris combined to produce a sweet sound on such familiar classics as “The First Noel,” “It Came Upon a Midnight Clear,” “Hark! The Herald Angels Sing,” “O Come All Ye Faithful,” “Silent Night,” “O Little Town of Bethlehem,” “Away in a Manger,” “Joy to the World,” “God Rest Ye Merry Gentlemen,” “Jingle Bells,” “Deck the Halls,” and “Jolly Old St. Nicholas.”

They concluded with Harris on piano and Weldon singing solos of “Mary Did You Know?” and “O Holy Night.” Tommy’s wife Sharon joined them for an acapella version of “Silent Night.”

Just for fun, everyone joined in the singing of “Rudolph the Red-Nosed Reindeer,” “All I Want for Christmas is My Two Front Teeth” and “I’m Gettin’ Nuttin’ for Christmas.”