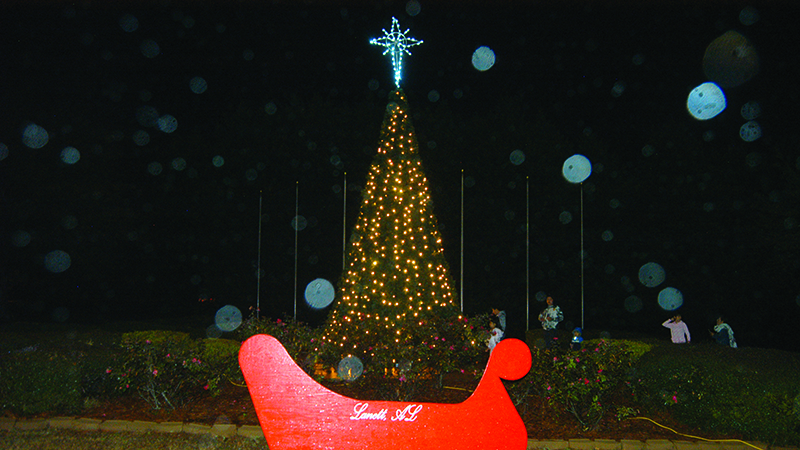 Tis the season: Before the Lanett City Council meeting Monday, the city Christmas tree was lit.

LANETT — Mac Langley, a former mayor and long-time businessman in Lanett, had the honor of lighting the city’s Christmas tree this year. The Monday evening ceremony took place on the W.O. Lance Elementary School playground. Light rain was falling when the program began at 6 p.m. but had tapered off by the time it concluded approximately one hour later.

A few minutes before 7 p.m., Langley pulled a switch on a remote control device lighting the 25-foot-tall tree across First Street in Veterans Park. The big tree is topped by an enormous lighted star. There was a lot of applause and cheering from the crowd as the brilliantly lighted tree was seen for the first time in 2021.

Despite the rain, it was a fun evening with singing from a covered stage and the awarding of door prizes and four children’s bikes.

“I want to wish each one of you a Merry Christmas,” Heard said. “May this Christmas be more special to you than it has ever been. Christmas is a season of great joy, a time for remembering the past and hoping for a good future. May the glorious message of peace and love fill you with joy during this wonderful time of year.”

A choir from the West Point Presbyterian Church sang some classic Christmas favorites. The crowd joined in to sing with them such memorable holiday tunes as “Deck the Halls,” “Joy to the World,” “Silent Night” and “We Wish You a Merry Christmas.”

Shaver Autry followed with a beautifully sung solo. “Come let us adore him, kneel down before him,” was the chorus.

City employees offering free Christmas treats were set up underneath a row of tents. Men from the Cemetery, Gas and Street Department had boiled peanuts, the Lanett Police Department had hot apple cider, the Recreation Department had popcorn and Clearwater Solutions (the city’s wastewater contractor) had hot chocolate and candy.

Two food trucks were present. Carl Harper was there making his ever popular Mama Mary’s grilled chicken wraps, and Keeboo’s was serving some delicious wings and burgers.

Heard thanked all five members of the city council – Tony Malone, Tamalita Autry, Charles Looser, Angelia Thomas and Tifton Dobbs – for being there on a rainy night.

He’s the owner of one of the city’s best-known businesses, Langley Buick, Pontiac and GMC Trucks. Son Mitchell is the vice president of automotive repairs and son Mark is vice president of sales. A third son, Phillip, is the U.S. postmaster in Roanoke and daughter Allyson Matthews is the principal of Eastside Elementary School in LaFayette.

“Mr. Mac has been in business for more than 50 years,” Heard said in introducing him. “He states that his dealership has faced problems over the years but has survived them all because of his family, employees and customers.”

A native of Chambers County, Langley grew up on a cattle farm at the end of the Great Depression and through the World War II era. He graduated from Lanett High School and attended the Nashville Auto & Diesel College in Nashville, Tennessee. He was drafted into the U.S. Army and was stationed in South Korea for 13 months during the Korean War.

Santa arrived just past 5:30 p.m. and greeted children underneath a tent in Veterans Park. He posed for pictures with lots of children and introduced them to his dog Butters, a Maltese-Poodle mix.

WWII veteran honored with quilt from Quilts of Valor