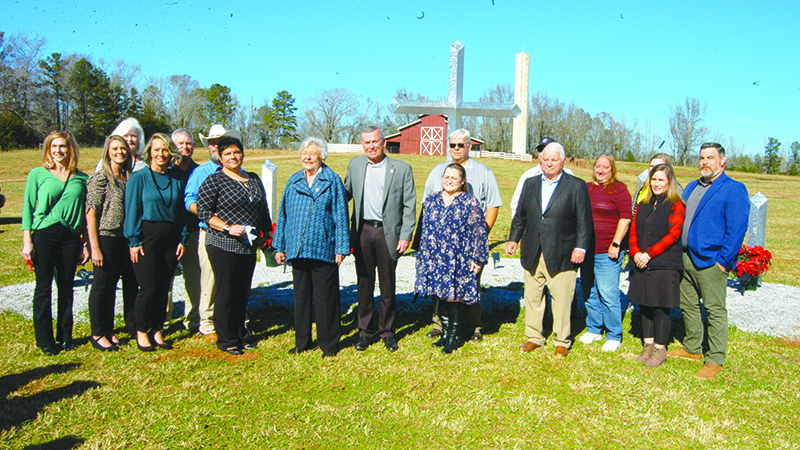 Girls ranch memorial: Alabama Gov. Kay Ivey (at center) traveled to the Tallapoosa County Girls Ranch on Tuesday to take part in the dedication of a new memorial there. A large metal cross and eight smaller ones represent the lives of eight children who died in a multi-vehicle pileup on I-65 this past summer. Above, Ivey is standing between Ranch Director Candace Gulley and Ranch CEO Michael Smith. Also shown are some of the house parents, ranch volunteers and supporters of the Girls Ranch. Photo by Wayne Clark

CAMP HILL — An impressive memorial was dedicated Tuesday afternoon at the Tallapoosa County Girls Ranch. It sits in the open field across from the Ranch’s main administrative building and is dedicated to Bella, Ben, Dana, Haley, Josiah, Makenzie, Nicholas and Tea, the eight children who lost their lives in the June 19 multi-vehicle pileup on I-65 south of Montgomery.

Prior to the ceremony at the crosses, Governor Ivey spoke to a crowd of approximately 100 people at a luncheon meeting in the Louise Stewart Beeson Chapel, located 0n the grounds of the Girls Ranch. She said it was a blessing for her to be at an event that celebrated the lives of some beautiful children who tragically lost their lives last summer.

“God knows that I will continue to pray for your healing,” she said. “I am so impressed with your strength.”

The governor said the goodness of Alabama and the nation could be seen in the outpouring of donations to the Ranch and many thousands of people asking if they could do something to help.

“Helping others is what our state is all about,” Ivey said. “Each one of us is here on this earth for a reason, and if we can use our faith to change lives for the better that’s a good reason to be here. We are here today to celebrate the lives of these children.”

Governor Ivey recognized the house parents of the children who died last summer. She consoled them on their loss and commended them on the job they had done in giving the girls a good, Christ-centered home.

Governor Ivey was introduced by Nancy Buckner, the director of the Alabama Department of Human Resources.

In her remarks to the gathering, Buckner said the girls at the Girls Ranch had proven an old statement to be wrong.

“I’m sure all of you have heard that ‘you can’t choose your family.’ I don’t believe that,” she said. “The girls here are a family.”

Buckner said it was an honor for her to be at the Ranch to remember and celebrate the lives of children who died this past summer.

Micheal Smith, the Ranch CEO, said the new memorial couldn’t be in a better location. It’s lighted at night and overlooks the Ranch directly across the road from the main office and the ranch homes. “It’s a memorial we want to be there for many years to come,” he said.

Smith thanked the public for their continued support of the Ranch. He said that everyone affiliated with the Ranch had been going through trying times but that a single phone call with an encouraging message always means so much. Smith said the goodness has a way of coming from tragedy. He said that one of the best stories he’d heard had been told to him by an official from the state prison system. He told him that a state prisoner had one day asked a jailer if he could meet with a chaplain. Such a meeting was arranged and the prisoner told the chaplain that he had a daughter he didn’t deserve, that she had been living at the Girls Ranch and had died in the June 19 accident.

“I know she’s in heaven,” he told the chaplain, “and the only way I can ever see her again is if I can get there, too. I want to give my life to Christ so I can see her again.”

Smith said that Bella, Ben, Dana, Haley, Josiah, Makenzie, Nicholas and Tea had a special place in the hearts of many, many people.

“They will never be forgotten,” he said.

He showed the crowd a large plaque that had recently been given to the Ranch by the Southern Company. It included those names and said that they’d never be forgotten.

Tommy Gulley, husband of Ranch Director Candace Gulley designed and built the memorial with the help of a long-time friend who is skilled at welding. Alafab donated the materials.

“I can see it from my office,” she said. “I’m so glad we have something like this that’s in memory of those kids. Along with us, there’s a lot of hurting families out there.”

Four out of every five girls at the Ranch came through the state’s foster care program. Gulley said it means a lot to these girls for two of the highest-ranking officials in the state, Ivey and Buckner, to come to the Ranch. “They can know that people in high places care about them,” she said. “That means a lot.”

Gulley said the last six months has been a whirlwind for everyone connected to the Ranch. “People from all over have rallied behind us,” she said. “We have gotten financial help, and lots of people have stepped up to volunteer for us. There are so many people out there we want to thank personally, but if we start naming names we could leave someone out, and we don’t want to do that. We just want everyone to know that their support means everything to us.”

Gulley said she would never forget the eight children who died and what they meant to the Ranch. “We all loved them,” she said. “I think about them every day.